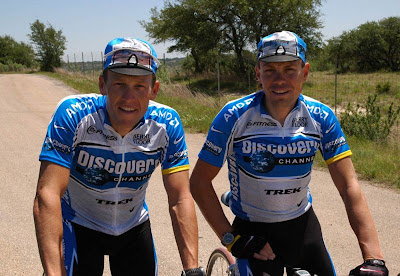 Cathy: How are you, Eki?

Ekimov: Hello Ekaterina. Well, I’ve been busy and am getting ready to go home to St. Petersburg. My brother bought a car in Germany and I have to pick it up, then take a boat to Helsinki and then a two-hour drive. It’s a little bit crazy! I’ll be back just before the camp in Tenerife, and then maybe I’ll go back again for Christmas. We’ll see.

Cathy: Well, before you go let’s talk a little about the season. The Vuelta was your last race of the season and your first Grand Tour win as a Director. Can you talk about what it meant to be part of that?

Ekimov: I didn’t play such a big role there because I was driving the second car. Johan was there with Alain in the first car. But I won two time-trials because I was involved in those. The first one Alain helped me and then the second one I was there alone. Also some of the time Johan asked my opinion on racing situations, asking me what I would do. But really I think he already knew the answer and was just giving me a test! So while I wasn’t the main guy I still feel part of the success. I am always happy when our guy is winning a race, but I feel it’s between me and the rider. I don’t show as much happiness on my face like others might. I’m happy and I’m proud but I’m not doing any super celebrations.

But I’ve been with you at races and I know when our guys win you are very, very proud. You just don’t show it so much.

Yes you have to be. On the bus when everyone is celebrating you feel like you are a rider again and back in the business. It’s a very good feeling. The victory is shared.

Now look back over the season and just share a few highlights for us.

Well of course it was a very successful season. Two Grand Tour wins and almost 40 wins during the year. This was not just a season, this was a super season! It’s a remarkable kind of success that I will keep in my mind forever. But the next step will be based on these results—we cannot go any lower. We have set the bar very high.

Do you feel the team can repeat such success?

What a big difference from a year ago. A year ago the task to turn the team around looked like such a difficult thing to do but less than a year later it has already happened.

Yep, I think it’s like cooking pancakes. If you take the 2007 Astana team as the first pancake, well that pancake didn’t come out so good. The second one was much more successful and I think from now on we’ll be delivering the good pancakes!

And now Lance is coming on the team. One year ago if you would have said that Lance was coming back to racing and that he was going to ride for a team from Kazakhstan, people would have said in disbelief: “No Way!”

The disbelief we all felt when we first has now turned into a good dream! Everyone knows Lance and everybody likes him except the French guys. So I know that with Lance as a rider on the team the team is going to go much, much higher. Lance is not a guy that plays around. He always has a professional way of working and professional way of having things organized around him.

When did you first find out?

At the Vuelta. We were in the middle of the race and didn’t want to disrupt the guys or interrupt their focus so we tried to stay quiet about it. I knew as soon as the news hit that people would stop talking about the Vuelta and then all the questions would be about Lance.

Were you shocked or surprised?

I was right at the first, but when I started thinking about it…Lance is still a young guy and he still has ambitions for the sport and wants to be in professional races. I understand that.

When Lance made his announcement to come back, Chechu immediately said he might hold off on his own retirement in order to ride with Lance again. Did you have any thoughts about coming out of retirement yourself?

I would love to come back if I could remove 5 or 6 years from my age. But I’ve realized and accepted that my training is gone. And so now I have found a position on the team where I can help other guys and this is perfect. Many of the new guys will be shocked at the beginning the way Lance will take command. But I will share with them my experience of working with Lance and calm them down, telling them that it will elevate the position of the team and themselves.

You will have a different relationship with Lance now. Instead of being his teammate and working for him you will be his director. Do you see a problem with this new role?

I am comfortable. Lance is always careful with the guys on the team and I hope that to Lance I am still Eki. He is the one that first named me Eki so I hope I am still that guy to him. I haven’t talked with him because I don’t want to be one of the guys calling him and leaving a message or email. I will see him at camp and maybe we can sit down and share a glass of wine. I think that will be most comfortable for us.

How about your race program for 2009? Do you know what races you will do?

Well, we have Dirk Demol coming back to the team. I probably won’t do the Tour de France because it will be Johan and Alain and Dirk. But I would like to do some spring classics in Belgium. And the Vuelta for sure. Maybe the Giro but I’m not sure about that because Lance will be there for the first time. And I’ll be at the Tour of California again for sure, that’s one of my races.

Of course we recently had another series of doping scandals with the two Gerolsteiner riders testing positive at the Tour. Despite that bad news, in general how do you think cycling is doing in cleaning up the riders?

Well for sure the fight against doping in the past few years has gotten better and better. But what happened in the past few months has been the ultimate bad thing. This can’t continue. Soon there will be no investors, no teams or the level will be reduced to amateurs. It won’t be professional at all. If there are still guys thinking, “Yeah, maybe I can still do something,” maybe now they know they can’t get away with it. Especially with the the new methods of finding the cheaters. In my opinion there is no room left for cheaters.

It was a big surprise that the Tour of Germany wasn’t going to continue. What did you think about that?

Germany is a big country and cycling is a popular sport there. To make this decision perhaps has something also to do with the world’s financial crisis that is going on. Perhaps that is the real reason they stop but they use doping as an excuse and no one can dispute it. Plus the manager of Gerolsteiner was the most out-spoken person in the peloton, always saying his team was so clean and so perfect. And then look how he was shot down by the positives on his team. I’m not a German guy and I’m not living in Germany so I guess I could say I don’t care what is going on there. But truthfully I am really sad that such a big country has basically banned cycling for now and that should not happen. Germany is still part of Europe and there are potentially good riders there. I think this is a big German panic. I don’t understand how not showing a race in France affects Germany—I could better understand if it were French TV saying they were upset with the race. But for Germany just turn your camera on and show the race! Millions of people will still be watching, they will just go to Eurosport instead of German TV.

It’s too bad they are bailing out on the sport instead of trying to be part of the solution.

So it’s the off season—any vacation plans besides the trip to St. Petersburg? That kind of sounds like work to me!

I don’t know. I travel so much during the year that I like to be home. But maybe I will go to Egypt for a week. What is good there are the hotels and always good weather, but for the rest I don’t care for it so much. Any time I go away I have my phone with me and am always on the phone so it’s still like working!

And you told me (girlfriend) Rasa was going to retire after the World Championships—did that happen?

That’s what she said to me, and since then she hasn’t touched a bike! She says she’s done. She’s tried to quit before but decided to come back. It might be kind of hard for her soon, it’s a little depressing, but I think she will be okay.

And your son Slava? Is he riding his bike much?

He’s so busy with school right now. And his time on the weekends is spent on his scooter with his friends. He finds that more fun than his bike. He likes being with his buddies!
Posted by Recovox at 8:40 PM