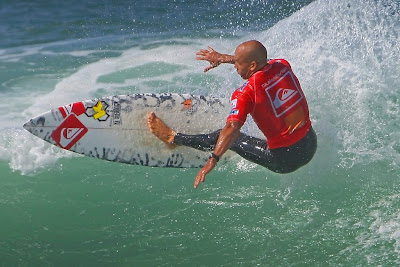 Kelly Slater has just won his ninth world surfing championship today in Mundaka, Spain. Dominating five of the season's first eight contests, Slater accrued enough points to clinch the 2008 title with two scheduled Association of Surfing Professionals (ASP) Tour contests yet to be surfed. Slater's ninth world championship comes 16 years after his first, in 1992, and is his third championship title following a three-year foray into semi-retirement.

Slater's win today solidifies what some say is his best season yet in an eighteen-year career, and reaffirms his unequivocal status as the most prolific surfer of all time.

On what his surfing means to him and others Slater remarked, "The rewards have paid off for a lot of work and commitment to surfing my whole life. I'm stoked, I just try to do the best I can with what I've got."

After winning the 2008 season opener at the Quiksilver Pro Gold Coast, Slater built momentum over the next six contests, winning 32 of 35 heats surfed going into the Quiksilver Pro France last week, where he placed second. He arrived at Mundaka on Sunday as the presumptive 2008 World Champion, and needed only a ninth place finish to clinch a ninth world title.
About his 2008 season Kelly said, "I had a great year, and it's nice to be rewarded like this. But besides that it felt like a great year. A lot of good things have happened up to this point on the tour."

Reflecting on winning the title again at Mundaka, Slater said, "It's freezing, but a lot of people showed up to see today, so thanks to everyone who is here. Thanks for being here and being a part of this. It's magic. We have surf and my year is complete."

In 2006, he earned his eighth world title at this same Spanish surf spot. Observers at the time felt it would be his last. But as he was carried today up the rocky Basque country shoreline by friends and cheered by throngs of Spanish supporters on the cliffs above, it was clear that Slater is better than ever.

Asked if he's going to continue surfing Slater said, "Always, surfing is a constant challenge. I'm sure when I'm eighty I'll think I'll be getting better. It is just my life and it never ends."

Slater ascended to surfing's top-spot in the early 1990s, ushering the old guard out with a rare competitive spirit and a never before seen style. He won the world title a record six times between 1992 and 1998. In 2005, seven years after his previous title, Slater made an incredible comeback to win a highly emotional seventh world title in Brazil. Still Slater showed no signs of slowing down. In 2006, Kelly handily won his eighth world title and continued competing, pushing his records further from the reach of second best.

"Kelly Slater is an extraordinary human being, physically and mentally. His talent and accomplishments are unmatched in surfing and perhaps in the history of sports," says Bob McKnight, Quiksilver President, Chairman and CEO.

The nine-time World Champion's victory lap promises to be as action-packed as his 2008 season. This fall, Slater is releasing his second book; a collection of rare interviews and unpublished photos, titled "For the Love" (Chronicle Press). He'll also continue to work on "The Ultimate Wave," a 3D IMAX feature film due out fall 2009. And as surfing's biggest icon and greatest ambassador, Slater will continue to promote a cleaner, safer planet through The Kelly Slater Foundation ( http://www.kellyslaterfoundation.org). Although he'll likely continue visiting the world's best surf spots, he may also catch a few waves at his homes in Florida, Hawaii and on Australia's Gold Coast.
Posted by Recovox at 10:04 AM