Alexander and Wellington run away with Ironman World Championship 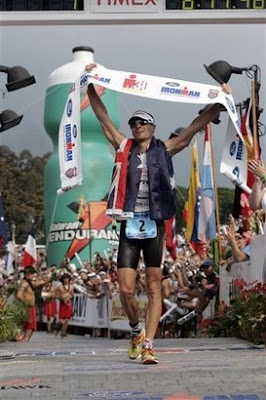 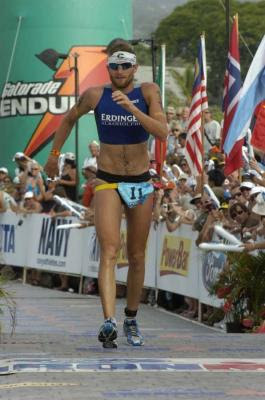 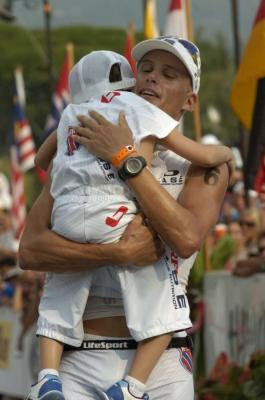 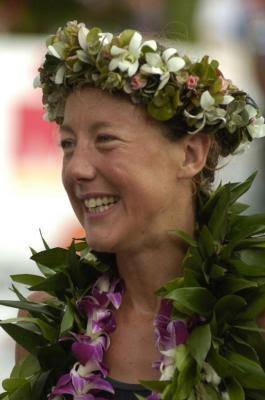 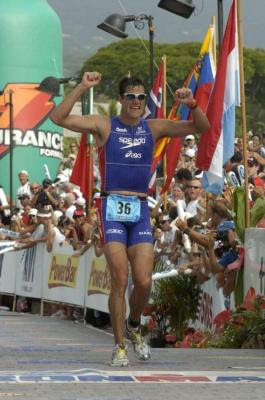 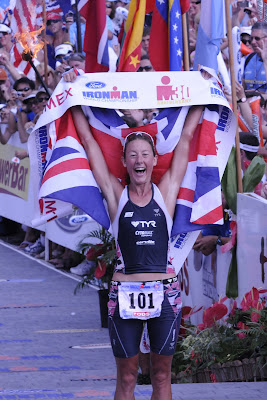 In only his second attempt at the Hawaii Ironman World Championship, Australia's Craig Alexander used a blistering run to win by three minutes over Spaniard Eneko Llanos. In a field full of strong cyclists, "Crowie", as Alexander is known, remained patient on the bike and took over the race on the run. Alexander was 13th out of the water, 11th off the bike and first at the finish after a 2:45:00 marathon.

In the women's race, undefeated Iron-woman Chrissie Wellington of Great Britain battled back from a 10-minute stop to fix a flat tire to go on to win by 14:57 over Yvonne Van Vlerken of the Netherlands. Wellington's run-split of 2:57:44 was a new course record. Sandra Wallenhorst of Germany also ran under three hours (2:58:35) to finish third.

How the men's race unfolded

Few were surprised to see American Andy Potts, Frenchman Benjamin Sanson and Aussie Pete Jacobs smoke the rest of the field on the swim. Potts was first to exit the water, with Sanson three seconds back and Jacobs another three seconds behind. The group had three minutes on the next pack, which included Kiwi Bryan Rhodes and Spaniard Eneko Llanos.

Twenty miles into the bike Sanson still led and Potts was on the side of the road serving a drafting penalty. Super-bikers Chris Lieto (USA) and Torbjorn Sindballe (DEN) were less than half a mile behind Sanson and making up ground—fast. Also playing catch-up were defending champion Chris McCormack (AUS) and two-time champ Normann Stadler (GER), who were both about two minutes behind.

Flash-forward to the bike turnaround at Hawi and the leaderboard had changed entirely. Lieto Sindballe set the pace, with 2005 champ Faris Al-Sultan (GER) one minute back and Llanos two minutes behind. Shortly after the top athletes made their turn for home, McCormack snapped his front derailieur cable and was in serious trouble. Macca was told by tech support that it would take up to 20 minutes to repair and he decided to drop out of the race.

As the leaders stormed back toward Kailua-Kona, Sindballe dropped the hammer and began to pull away from everyone. Shortly after mile 70, we clocked Torbjorn at 28 mph, pedaling at 70 rpm. Needless to say, he was really grinding.

Sindballe hit T2 with a lead of almost five minutes (after a 4:27 bike-split) over Lieto and six minutes over Stadler. Next off the bike were Eneko Llanos and Al-Sultan, two of the strongest runners in the field.

Sindballe looked strong as he charged out of transition and onto Alii Drive, but Llanos and Stadler looked even better. The Great Dane’s lead quickly diminished and the pair of Llanos and Stadler made quick work of the two leaders (Lieto and Sindballe). At the 10-mile mark, Stadler was in the lead with Llanos only a few seconds behind. Lieto and Sindballe dropped well off the pace and Aussie Craig Alexander surged into third position, 2:30 behind the leaders.

Alexander took over the lead around the 17-mile mark, after running 6:20 per mile to that point. He opened up a small gap on Llanos and easily grew his lead with each passing stride. Shortly after Crowie moved into first, Brown passed Stadler to assume third position.

At the 22-mile mark the race was all but over. Alexander’s lead was at three minutes and growing fast, as Llanos battled to hang onto second over a surging Rutger Beke (BEL).

Alexander crossed the line in 8:17:45 after running a 2:45:00 marathon. Three minutes later, Llanos finished second, barely hold off Beke, who was only 33 seconds back of the runner-up. Two of the biggest surprises of the day came from the fourth and fifth place finishers. Ronnie Schildknecht (SUI), who won Ironman Switzerland earlier this year, finished in fourth today, only 23 seconds behind Beke. Fifth place was German Timo Bracht, who may be disqualified pending review of a bike-course infraction. The second, third and fourth place finishers (Llanos, Beke and Schildknecht) were separated by only 56 seconds.

In his first-ever Ironman Potts finished as the top American, in eighth place, after an 8:33:50 effort. Michael Lovato was the next American to finish – 57 seconds behind Potts – in tenth.

How the women's race unfolded

Team TBB athlete Hillary Biscay was out of the water first for the women in 54:35, followed closely by a pack of Gina Ferguson, Gina Kehr and Nina Kraft ten seconds back.

Onto the bike, Kraft made an early move in town and through the ten-mile mark had three seconds on Dede Grisebauer and Kehr, with Chrissie Wellington in fourth at only forty seconds back.

Shortly after fifteen miles Wellington took the lead, pushing a big gear and within thirty miles already was 1:10 up on second-place Leanda Cave and almost two minutes up on a third-place Grisebauer.

Similar to the changing winds blowing the field all over the place, the women’s standings on the bike were all over as Granger moved into second at forty miles, 2:40 back of Wellington. Cave and Grisebauer were only a few seconds back of Granger.

At 55 miles, Wellington flatted and had trouble inflating her spare tube. After going through three cartridges, Rebekah Keat threw another to her and rode off. The Britt, who typically takes the first bike of the bike easy, found herself having to play catch up. Wellington had a lead of five minutes when she flatted and afterward was six minutes behind the new leaders of Cave, Grisebauer and Granger.

Into T2, Wellington had over seven minutes on Granger and eight on Yvonne Van Vlerken, who quickly plowed through the field coming back from Hawi.

At a speed as blazing as the heat out on the course, Wellington continued to gain more time on the run, and had 9:34 on Van Vlerken at mile four. Granger was now sitting in third at 11:36 back.

On pace to beat the run record set by Lori Bowden in 1999, Wellington ran 6:30 per mile through the first 8 miles, faster then every male except Craig Alexander, who was happy to know she was running 10-20 seconds per mile slower than him.

The searing temperatures in the Energy Lab didn’t slow the thirty one year old’s pace as she ran a 6:37 mile into the turnaround. Back on the Queen K and through twenty miles, Van Vlerken was over 13 minutes behind and Wallenhorst holding onto third another three minutes.

Racing in honor of her grandmother who died of breast cancer six weeks ago and coming across the line doing the “Blazeman Roll”, Wellington won her second Ironman World Championship in 9:06:23, setting a new run course record by almost two minutes. In second in 9:21:20 was Quelle Challenge Roth winner Van Vlerken and in third was Ironman Austria winner Sandra Wallenhorst at 9:22:52.