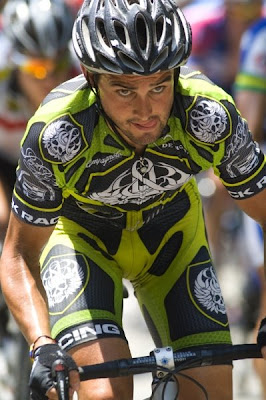 Oscar Sevilla, fresh off becoming the first non-Colombian to win the Clásico RCN in that event's 48-year history, will ride for at least two more seasons with Rock Racing.

Sevilla confirmed he’ll stay with the California-based team through 2010 and is keen to return to European racing.

The Spanish climber says his Rock Racing team is hopeful of receiving some invitations to compete in an expanded European calendar for 2009, perhaps including the Vuelta a España.

“I’m happy racing here, but it bothers me that I’m not at the Vuelta or the Tour,” said Sevilla in Spain’s Marca sport daily. “I’m still dreaming of returning to the Vuelta. And now that I’ve recovered from my leg problems, I’m sure I could fight for victory.”

Nicknamed “El Niño” for his boyish good looks, Sevilla is now 32, but still believes he has a lot to give in cycling.

Once hailed as the next big thing in Spanish cycling, he twice finished second in the Vuelta a España before joining the T-Mobile team in 2005.

His downfall came when he was linked to the Operación Puerto doping scandal and was not allowed to start the 2006 Tour de France, along with teammate Jan Ullrich and seven others.

Like all Spanish riders linked to the widespread blood doping ring, Sevilla was “outed” in a series of damaging media links, but has never faced any legal or sport sanctions, in large part because the Spanish cycling federation says it will not open any disciplinary actions against any national riders until a legal investigation is concluded. The Puerto case is currently under appeal.

Sevilla, meanwhile, was allowed to return to racing, but major teams were shy to offer a contract.

He landed at Spanish continental team Relax-GAM in 2007, but his links to Puerto along with new teammate Francisco Mancebo, another rider banned from the 2006 Tour, meant that the team was not invited to the 2007 Vuelta. The team collapsed soon after it was not invited to Spain’s grand tour.

Sevilla found a sanctuary with Rock Racing, where he rides alongside other Puerto “refugees” Santiago Botero and Tyler Hamilton. All three were kept out of the Tour of California this year by race organizers, but Sevilla is optimistic the team will get some invites next year.

So much so, he’s signed a contract extension to keep him in the team’s distinctive jersey through the 2010 season.

“Despite not racing the Vuelta, it’s been a great year,” he said. “This team is great to me. They respect me, they pay me well and they give me affection. The team is making contacts with European races. The boss is very interested in racing in Europe.”

Next year, Sevilla will be joined by new teammates Mancebo and José Enrique Gutierrez, the alleged “Bufálo” from the Puerto list.
Posted by Recovox at 9:28 AM