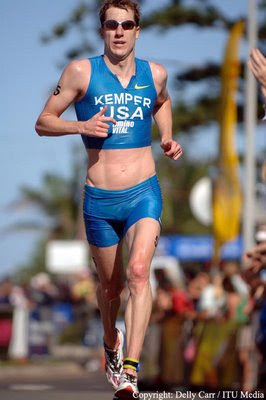 The five-race series comes to a close at the San Francisco Triathlon at Treasure Island on Saturday, Nov. 10, with 48 elite men and 21 elite women taking to the Olympic distance course (1.5k swim, 40k bike, 10k run).

Professional triathletes from Canada, Venezuela, Mexico, Great Britain, Chile, and Australia will join some of the top triathletes in the United States. Included in the list are Olympians Hunter Kemper (Longwood, Fla. / Colorado Springs, Colo.) and Victor Plata (San Luis Obispo, Calif. / Sacramento, Calif.), one athlete who has already earned a spot on the 2008 U.S. Olympic Team, and a host of others who are still in contention for those final slots for Beijing next August.

To make things even more interesting, USAT is awarding double points for the race winners, meaning more than a dozen athletes in both the men's and women's races are still in contention for the overall series title.

Excellent blog you’ve got here. It’s difficult to find high-quality writing like yours nowadays. I really appreciate individuals like you! Take care!! You can visit my site.
Starting out in triathlons