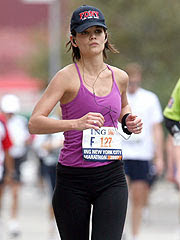 While fans along the 26.2 miles of the New York City Marathon path found it hard to spot her, one keen observer on the sidelines knew exactly what runner he was kissing on Sunday morning. Her number: F127.

She got a quick, wet one from husband Tom Cruise as she entered the final stretch to the finish line in Central Park.

And Tom wasn't alone for the brief encounter with his running wife. In his arms was the couple's daughter, Suri.

Tom and Suri, as well as his mother and Holmes's parents, were all at the finish line to greet the runner, who seemed anything but exhausted, despite the strenuous day she had just endured.

Right after that first kiss, Holmes still had a way to go after Tom caught up her at 1st Avenue and 96th Street, about 20 blocks from the Cruise's Upper East Side hotel. A path over to and down Manhattan's West Side was still before her.