Bjorn Andersson Checks In With nxtri.com 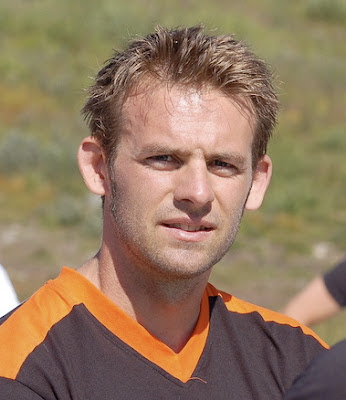 You just finished Ironman World Championship 70,3 in Clearwater with a fantastic bike split! How does it feel to have a raced 90 km in under 2 hours?

I was happy with going under 2h but I would have liked to follow it up with a better run of course.

After the Clearwater race, you wrote on Slowtwitch.com forum ” I went too hard on the bike today at Clearwater 70.3.”. Do you feel that you didn´t make a good race in Clearwater?

The race was a big goal for the year for me and I was in good shape coming in but I had to change my plans early in the bike ride from having good race overall to go for the bike preems once I noticed how hard it was to get away from the packs. It wasn't so much the pace itself during the bike but the sustained changes of pace needed to get away from everyone that killed my race. I jogged in to finish the race and came in quite far down in the field so in that respect it was a pretty bad race. It was a conscious decision I made though so I could at least make some money on the bike when the race turned out the way it did. I know I have no shot at the overall if I can't get a bigger gap before the run.

Your Norseman 2005 race, was probably through the worst weather condition in the Norseman history. Tell us abour your race.

Norseman was a great experience and one of the few races that stand out from the run of the mill ironman races around the world so I really enjoyed that. The race itself was very though and very cold that year which suits me so I had a really good race. One of the better ones I've had overall actually. The last section of 5km up to the race finish on the small trail with the strong wind and snow really put me in a lot of trouble though since my body temp started to drop. I was really happy there was a warm cafe at the top and that I didn't have to walk the whole way down again since I'm not sure I'd have made it then.

Some athletes claim that Norseman Xtreme Triathlon is among the thoughest race in the world. What is your opinion?

There are no easy iron distance races but of course Norseman is one of the most challenging ones. Tthat's also what makes it more interesting than some of the other races and even though I'm by no means a great climber I enjoyed the hilly terrain.


Were you reasonably reckognised for winning Norseman, or was it a waste of energy in terms of publicity?
Publicity is always good when you're trying to make a living off a sport but that’s not the reason I decided to do Norseman. I did it because I thought it was cool race and as a bonus, contrary to what I thought, I actually did end up getting some pretty good press from it. So it was worthwhile in many ways.

Since your Norseman race, you seem to have choosen to race mostly ½ Ironman distance races. Why is this?

I've had problems with Ironman races and haven't really completed a lot of good ones so I decided to do more halfs which I know suits me well. I needed to get some more consistent results so the fact that it's possible to race more of them and that I was better at them made it a natural choice. Ironman is cool but it takes a really long preparation and recovery phase so you only really have a few chances each year to get it right which can get pretty frustrating at times when things go wrong. It's more fun for me to be able to race big races more often.

You are known for your awesome bike skills! Can you tell us how you train this time of year? In the Off-season?

I have about two months in November and December when I don’t really do any kind of structured training. I feel like I need a good break to be able to keep training and racing the rest of the year without getting burned out. Anyway during this time I do some training in each three disciplines but only when I feel like it and usually stuff that I don’t do during the season like going out on my cyclocross bike on gravel roads.

Any good advise for bike training in Scandinavia and northern Europe in the winter time?

The best advice would be to travel someplace warmer.. Seriously though I prefer riding outdoors at all costs compared to being inside on the trainer during winter time. A cyclocross bike is perfectly suited for this and with some studded tires I personally think it’s more worthwhile to ride outside even though road conditions are bad with snow and ice.

What do you have coming up for the next season?

Having just finished this season I’m still not quite sure about my schedule next season. The only thing I know is that I’ll start off by going to New Zeeland in January to host a triathlon camp with Bryan Rhodes. See http://www.triathlonpowercamp.com/ for more details on that. My first race will probably be California 70.3.

We have noticed you will be racing a new bike next year. Tell us about your sponsors. Bike, Wheels, Sadle etc.

For next season I’m working with Qroo, Hed, R&A cycles, Fuel Belt, Giro, Oakley, Rotor, Fit multisports and possibly a few other ones that are not quite finalized yet.
Posted by Recovox at 10:16 AM