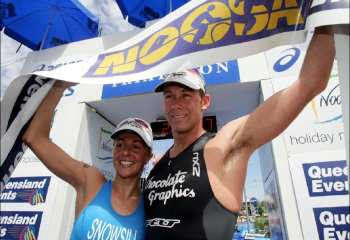 He was flat, tired and nervous and she was battling a mystery virus, but triathlons super couple Craig Walton and Emma Snowsill defied the odds to claim historic wins in the 25th Noosa Triathlon yesterday.

Walton, at 184cm and almost 80kg one of the big men in world triathlon, broke the road speed barrier as he hit 95km/h on a descent in the bike leg on his way to his record sixth win in the biggest triathlon in the southern hemisphere.

Snowsill, one of the smallest women in the sport at 161cm and 49kg, battled new pain thresholds to become the first female to win the 1.5km swim, 40km cycle and 10km run race four times.

Neither of the pair, dubbed the fittest couple in the world, expected to win after being plagued by injury, illness and mishaps.

Snowsill, a triple world champion, had felt so fatigued before the race she had planned to pull out of the race after the opening swim leg.

"I got caught up in the atmosphere and wanted to finish like everyone else -- exhausted, sunburnt and nearly suffering heat stroke," said Snowsill, who has not recovered from a bug she picked up in Beijing in September and who had the early symptoms of the flu.

"I was fighting with myself whether I should do the race, but it's special to me.

"It has captivated me ever since I came here as a swimmer 11 years ago and watched it."

Walton won his fifth title last year after a two-year battle with glandular fever and this triumph ended the bad luck that has cost him a major win this season.

Walton hit a pothole and broke his bike in the Lifetime Fitness race in Minneapolis mid-year, hit his head on a boat during the swim leg of the Chicago Triathlon and swam an extra 400m after a course miscalculation in the LA Triathlon.

"I wanted to show people Craig Walton has a little left in the tank," the Sydney Olympian said.

In his first race since a bout of food poisoning mid-year, triple world champion Peter Robertson finished behind the women's placegetters, almost 15 minutes behind Walton. "That gives me plenty of motivation (to make Beijing), being beat by the girls," he said.
Posted by Recovox at 9:46 AM