FOR CONTADOR, THE GOOD LIFE IS TRAINING 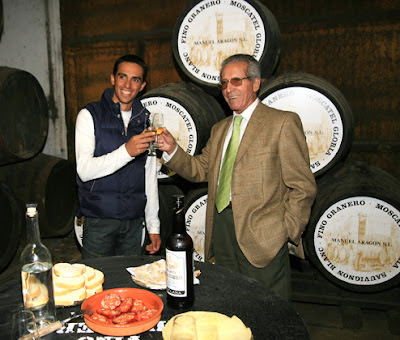 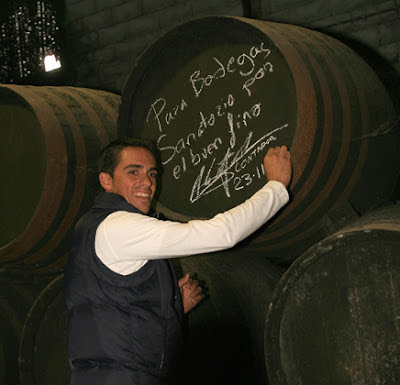 He stood under the Arc de Triomphe—a cyclist’s gateway to celebrations—four months ago. But Alberto Contador still has to hustle to keep up with his social calendar.

Last Friday found him in Chiclana in Cadiz, a place that’s crazy about sports, especially cycling. Alberto visited Chiclana to attend the annual Sports Gala of the Vipren Foundation. The event is the creation of ex-cyclist Federico Bahamontes, the “Eagle of Toledo.”

Bahamontes, 79, can easily identify with Contador. A climbing specialist, he became Spain’s first Tour winner in 1959, going on to claim six KOMs. Contador, the fifth Spaniard to wear yellow, is following the Eagle’s career flight path. He may soar even higher.

Contador was the chief honoree among more than 40 athletes from different disciplines. One of many notables was former Olympic cyclist José Manuel Moreno (gold medal, Barcelona, 1992). The two men together in the same room brought to mind a question. Will Contador seek to follow Moreno’s example in Beijing?

For now, one thing is clear: He’s had enough champagne and caviar. “I’ve got to cut out the galas because it’s time to concentrate, and I’ve already begun to get ready for next season.”

Alberto commented about this and other matters to MARCA.

You haven’t gotten much vacation?

It’s true, I admit that mentally I’ve hardly had a chance to rest, but I’m already feeling the desire to get on the bike and start again.

Have you paid a price for your Tour victory?

It’s not so much that it’s been hard, it’s just different. I’ve had commitments in other years, too, but I never had to turn any of them down. This year, I haven’t had time for myself or my family. But I’ve tried to make the best of it.

When do you to plan to return to training?

I’ve started walking in the mountains a little (I’ve spent a few days hunting…or trying to). Next week I’ll starting going out on the mountain bike and some days I’ll also go to the gym. Soon, little by little, more and more bicycle and less of all the others, although there’s no hurry, because I can reach form very fast and I’m not interested in rushing things.

Have you already designed your training program with Johan Bruyneel for 2008?

No, not yet, but I don’t think there will be any big changes from this year because things have gone so well for me.

Will we see, therefore, a complete winner of the Tour de France fighting for the victory in Paris-Nice?

Yes, why not? I like to go to the important races at a good level and ride to win. The problem, in any case, will be after the Tour, because it’s an Olympic year and if I’m on the Olympic team, I won’t be able to ride in the Vuelta a España so soon after.

About the Olympic Games, it’s been said that you’re not a rider of one-day races.

But that’s a special race, one that only comes along every four years, plus I hear—I don’t know if it’s true—that it’s very difficult because it has a 12 km hill that’s climbed six times. If it’s true, it could work out very well for me, although it wouldn’t bother me to work for Oscar Freire and Alejandro Valverde if the circuit isn’t as demanding as I’ve been told.

Let’s talk about the Tour, your great objective. Are you already feeling pressure?

If so, only a little, although I’m really going to notice it when I go to races and find myself surrounded by the peloton. But I’m conscious that if I feel pressure it’s because I’ve won it, so I tell myself if I’ve won it once, I can win it again. To me, that’s motivating.

Do you have confidence in your possibilites?

Yes, I’ve always believed in myself, but now, after the successes of this year, I know that I can keep winning.

So, do you see yourself winning the Tour again?

I’ve got a lot to do. Before, I dreamed about winning, and now, after winning it once, I dream about going back and winning it again. Before long there’ll be many factors influencing me, but I do sincerely see myself with possibilities. And to do it, I’m counting on the best possible team at my disposal.

Astana is not Discovery.

Hincapie and Popovych are gone, but I’m still counting on Noval, Paulinho, and Vaitkus in the flat stages, Leipheimer and Brajkovic for the tough times. Horner has been a valuable addition, Rubiera has a great deal of experience, Dani Navarro is very young…He won’t need to be babied by the team or the director, because he knows how to handle the race as well as anybody else.

Who will your rivals be?

I’m not forgetting about it. But if I do the Olympics it will be difficult to ride the Vuelta, because when I go to the Vuelta, I want to do it in optimal condition, and I’ll have to wait a year or more for that. I have a huge desire to try to win it, but the conditions must be right. Neither this year nor next year.

Are you ready to say goodbye to the good life?

Good life? The good life is training. I need to have something going on in my head, I need a work routine, a goal…It’s easier for me to train than to be happy rubbing elbows with the whole world.

Has it occurred to you, quietly, that you’re in the same position as Armstrong, your idol?

I still don’t see myself that way. I saw him and he was incredible. However, being here has always been what I loved, my dream. I like it. Hopefully it will be like this for many years.

Subscriptions to the Alberto Contador Fans Notebook are available by contacting contadorfans@hotmail.com
Posted by Recovox at 9:50 AM