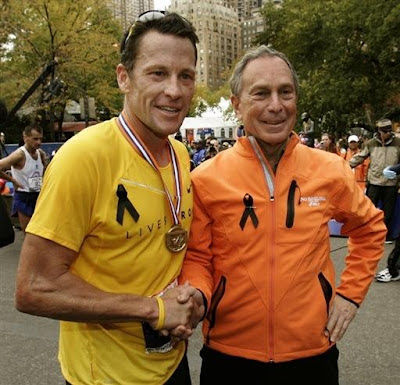 Seven-time Tour de France winner Lance Armstrong bettered his 2006 time in the New York City Marathon by over 10 minutes on Sunday. The 36 year-old ex-cyclist from the United States recorded a time of two hours, 46 minutes and 43 seconds.

"I think I came in better prepared," said Armstrong according to Reuters. He competed for 14 years as a professional cyclist, and took up running after retiring following his 2005 Tour victory. Last year, he ran the 42.16-kilometre (26.2 miles) event – his first marathon – in a time of 2:59'36".

"I feel better than I did last year leaving here. Last year it took me about four or five months to actually be able to run again because of my shins. Last year I had no idea what to expect with 26.2 miles (42.16 km), and I paid for it."

"I'll continue to run," continued the Texan, who ran in a yellow jersey. "For me running is the best type of workout right now because with a busy lifestyle and travel, all you need is a pair of running shoes and you can do it in any city in the world."

He finished 698th among 39,085 runners taking part. His time topped that of former cyclist Laurent Jalabert; the Frenchman ran the 2005 event in a time of 2:55'39". However, other former cyclists have gone faster in other marathon events; German Rolf Aldag ran 2:42'57" in Hamburg this April and Spaniard Abraham Olano went 2:39' in the San Sebastián marathon last November.
Posted by Recovox at 9:26 AM