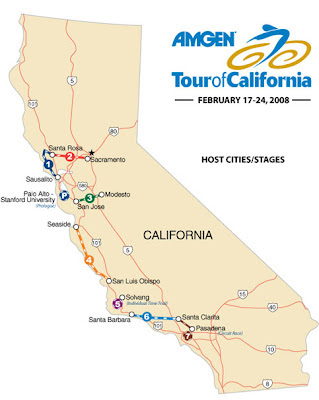 Organizers of the Amgen Tour of California released details of the 2008 edition Tuesday, highlighting an eight-day, 650-mile race slated to start with a prologue at Stanford University, in Palo Alto, on February 17 and end a week later in Pasadena.

"The challenging geographical features and picturesque landscape of California provide the perfect combination of elements for a world-class cycling event," said Kristin Bachochin, senior director of AEG Sports, organizer of the race. "For the third year of the Amgen Tour of California, we remain committed to upgrading and enhancing every element of the race experience for the cyclists and spectators by creating an even more challenging and exciting race."

According to organizers, the 2007 Tour attracted more than 1.6 million spectators, surpassing the inaugural year's turnout and setting records in attendance for a single sporting event in California, as well as for any cycling event ever held in the United States.

Prologue: Palo Alto-Stanford University (Sunday, February 17, 2008)
(Start time: 1 p.m.) Expected finish times for this flat 2.1-mile prologue are less than five minutes. While short, the route will offer ample opportunity for spectators to watch their favorites power through a course centered on the Stanford University campus. The Stanford Oval will put riders into a full 360-degree loop before they head to the finish line at the intersection of University Avenue and Museum Way on campus.

Stage 1: Sausalito to Santa Rosa (Monday, February 18, 2008)
(Start time: 11 a.m.) This stage is identical to the first stage used in the earlier editions of the Tour of California and will cover nearly 100 miles from Sausalito to Santa Rosa. The stage, sponsored by Herbalife, begins with a climb from Mill Valley up to Mt. Tamalpais State Park before turning toward Muir Beach. The relatively flat route will take the riders north toward Bodega Bay and Coleman Valley Road, a landmark climb in Northern California. Spectators can watch the stage win unfold as the field heads downhill from Occidental for three finishing circuit laps in downtown Santa Rosa. In previous years, the Santa Rosa fans have set the mark for one of the largest and most enthusiastic crowds of the entire race.

Stage 2: Santa Rosa to Sacramento (Tuesday, February 19, 2008)
(Start time: 10 a.m.) Using another established Tour of California route, stage 2 begins with a scenic start through several Sonoma County wineries before reaching one of the most significant climbs of the race as the route heads east toward the the state's capital, Sacramento. Twelve miles from the start, Trinity Road's vertical climbs and treacherous decent into the wineries of Napa Valley will make it one of the most difficult climbs of the entire race, as proven during the 2007 Amgen Tour of California. Continuing east past Lake Berryessa, the peloton will head through the cities of Winters and Davis. With a quick turn to the north, the route will follow the Sacramento River to the Tower Bridge and on to Capitol Mall in Sacramento. The stage concludes with three circuit laps through downtown, finishing on the front steps of California's Capitol building, a perfect viewing location for race spectators.

Stage 3: Modesto to San Jose (Wednesday, February 20, 2008)
(Start time: 10 a.m.) Stage 3 introduces a new course for the Tour of California, beginning with a neutral start of parade laps through Modesto's revitalized downtown area before heading south through California's scenic farmlands. After passing through Patterson, the route takes the peloton through what could be a defining portion of the 2008 edition, a 26-mile section full of twists and turns marked by a series of climbs near Frank Raines Regional Park, leading to a relentless climb over the backside of Mt. Hamilton. With an elevation of 4,360 feet, Mt. Hamilton will be one of the highest elevations ever reached in the Amgen Tour of California. After the descent, the riders will head to Sierra Road, another epic climb. Once the riders crest Sierra Road, the peloton will complete the course with a quick 18-mile run to the finish line in San Jose.

Stage 4: Seaside to San Luis Obispo (Thursday, February 21, 2008)
(Start time: 10 a.m.) Stage 4 is another traditional route, used in both prior editions of the Tour of California. The remarkable views of Stage 4 have made it a race favorite for riders and spectators alike. Beginning in Seaside with a short neutral lap and traveling along a similar route to previous years, the peloton will head south on scenic Highway 1 where sweeping vistas of Big Sur and redwood forests flank the Pacific Ocean. At more than 130 miles and with three KOM spots, this is the longest stage of the race and has proven to be a test for the riders with consistently hilly and technical terrain. The long day will take the riders down the California coastline by Hearst Castle before shifting inland toward the finish line at the intersection of Osos St. and Monterey St. in San Luis Obispo.

Stage 5: Solvang Individual Time Trial (Friday, February 22, 2008)
(Start time: noon) The quaint Danish village of Solvang annually hosts ProTour teams for training camps as well as some of the largest cycling events in the United States. At only 15 miles, slightly longer than the 2007 individual time trial and with the start and finish lines located only one block apart, Stage 5 is an ideal location for spectators to view the race. The route will highlight some of the most beautiful areas of Central California, winding through quaint towns, vineyards, farms, and one short, but steep, climb.

Stage 6: Santa Barbara to Santa Clarita (Saturday, February 23, 2008)
(Start time: 11 a.m.) Stage 6 could be the pivotal stage for the 2008 Amgen Tour of California. The stage is one of the longest at 105 miles, and it is heavy on climbs with four KOMs, three sprints and a demanding finishing circuit in Santa Clarita. With the individual time trial late in the race again this year, there is the potential for several riders to be separated by just a few seconds as they begin the stage. After a start in view of the Santa Barbara shoreline, this stage, sponsored by Health Net, will take the peloton to Highway 192 and through the town of Carpinteria. The route will then take the riders on Highway 150 where they will face two KOMs before passing Lake Casitas and riding into the scenic town of Ojai. The third KOM will be just a few miles outside Ojai, and then the course will head downhill into Santa Paula. The ominous Balcom Canyon will be the final climb of the day, where in 2007 nearly 25,000 fans formed a narrow corridor for the riders. The race ends with three circuit laps in Santa Clarita that finish at McBean Parkway at the Valencia Town Center.

Stage 7: Santa Clarita to Pasadena (Sunday, February 24, 2008)
(Start time: TBD) The final stage of the 2008 Amgen Tour of California represents a change from last year's event, which ended with a circuit race at the Queen Mary in Long Beach. Adding a relatively difficult point-to-point race at the end may put the overall race leader and his team under pressure to protect the jersey. The first 25 miles of Stage 7 include a gradual climb from Santa Clarita to the intersection of Angeles Forest Road. The route continues uphill to the highest elevation ever reached by the Amgen Tour of California on the towering Millcreek Summit (4906 feet). Descending with an eight-mile run to Angeles Crest Highway, the route begins a fast plunge to the Rose Bowl in Pasadena. After more than 60 miles from Santa Clarita to Pasadena, with the mountains and the Rose Bowl serving as the backdrop, the peloton will complete the stage and the race, with six five-mile laps on a tough circuit around the Rose Bowl.
Posted by Recovox at 8:04 AM