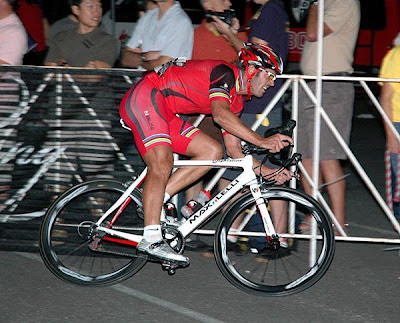 Will Mario Cipollini return to the peloton? Despite crashing in the Interbike Industry Cup, the former World Champion seems to be seriously considering the possibility. Cipollini retired abruptly from the peloton in April of 2005, explaining that after 189 victories he decided to give up when he could no longer dominate his rivals.

The news was first leaked by Rock & Republic's Rashaan Bahati on Bicycle Radio that the flamboyant Italian was considering joining the squad sponsored by the designer clothing company. Cyclingnews received confirmation from the team's director, Frankie Andreu, that Cipo is in talks with the team.

"[Rock & Republic owner] Michael Ball talked to Cipollini at Interbike - Cipo did surprisingly well there after being off the bike for so long - if he's actually been off the bike." Andreu was cautiously hopeful that the Lion King would be coming to his team, saying that someone as fashion conscious as Cipollini would be a good fit with his team which is known for being stylish.

Should Cipo return to racing, he would do so at the ripe age of 41.
Posted by Recovox at 6:01 PM