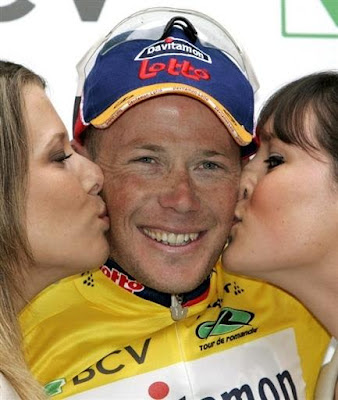 The Astana Cycling team announced Friday that its latest signings include American Chris Horner. Horner was named along with former Discovery Channel riders Jose-Luis Rubiera and Vladimir Gusev as the latest to join the newly re-vamped Astana team. The team management was taken over by former Discovery director Johan Bruyneel after Astana's triple doping positives this season threatened the team's future.

Horner will mark his 13th year as a professional under Bruyneel after helping Cadel Evans to his second place in this year's Tour de France, finishing 15th overall in the process. The 36 year-old did not extend his contract with his former team, Predictor-Lotto, where he has ridden since 2006.

Horner was openly critical of his pay at Predictor-Lotto's, saying he was paid one-third of what all the riders of his level in the Tour. He indicated he was looking for a better deal in August, saying, "If one team won't offer you what you are worth then you go somewhere else. There are a bunch of different teams out there where I could be happy."

New manager Bruyneel saw the value in signing Horner. "He will be of extreme value in the mountains for our leaders. Chris is extremely motivated to join our team." Horner will likely ride the Tour de France in support of this year's winner Alberto Contador and third place finisher Levi Leipheimer, both of whom will be a part of the 'new' Astana squad.

Bruyneel also hinted that more announcements would be forthcoming. "We are very ambitious. In the next days, we will announce more details about the Astana Cycling Team 2008."

The team also said that the new organisation will work to fulfil all financial obligations toward the 2007 team and staff. The statement indicated that some staff and riders had not received salaries from the former manager, Marc Biver. The Kazakh Cycling Federation promised to make all payments in the near future, and said that it had "ended collaboration with Zeus due to mismanagement/lack of confidence", and did not rule out legal proceedings against the company or Biver.
Posted by Recovox at 5:49 PM