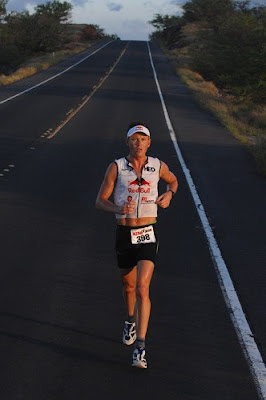 2004 Ultraman winner Jonas Colting of Boras, Sweden led wire-to-wire, finishing with a conservative, third-best 7:16:31 double marathon. His 21:59:57 finish - 16 minutes worse than his near-record 2004 race - left him with the fourth-best Ultraman men's time ever for the 320-mile, three-day triathlon stage race founded in 1983.

"This year was a lot harder than 2004," said Colting. "The first day currents on the swim cost me 14 minutes, and led to nutrition problems and cramps which depleted my strength for the final two days. Still, I'm excited to win here again in a race that stays true to the roots of the sport."

Brazil's 2003 and 2005 Ultraman champion Alexandre Ribeiro of Rio de Janeiro, Brazil, overcame a costly off-course excursion on Saturday's 171.4-mile bike, finishing with the second-best men's run of 6:38:53, which left him in second place overall in 23:05:04.

Tim Sheeper, a 44-year-old triathlon coaching executive from Menlo Park, California, and another Ultraman rookie, dropped from second place overall to third on the final day. His final day double marathon of 7:24:17 gave him an overall time 14 minutes behind Ribeiro and a spot on the podium.

Miro Kregar, a 43-year-old telecommunications worker and triathlon coach from Slovenia, came back from a broken crank and slow times on a borrowed bike on Saturday to finish with the fastest run of the day. Kregar's 6:27:58 run advanced him from 9th place to 5th with a finishing time of 24:45:26.
Posted by Recovox at 10:56 AM