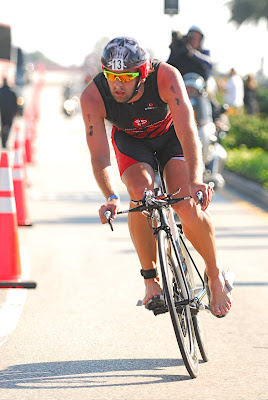 The 70.3 World Championships in Clearwater marked the end of the 2007 season for me. After some inconsistent training and racing previously this year I did some pretty good training for this race in September and October so I felt as prepared as I could have been and was excited to race.

I got a good start and was swimming in 2nd for the first couple of hundred meters until I got bunched in a bit and sat at the end of the first group for the reminder of it. Unfortunately I have a tendency to get sea sick when I swim in open water and after finishing the swim I was pretty dizzy and had a slow transition and consequently missed the first pack out on the bike.

There were a bit more than 10 guys in this group and when realizing how hard they were to catch and drop I made the decision to just focus on the bike prime at mile 31 since I would have no shot at making money by racing for the overall with this scenario as at best with my training I figured I could run a 1:16 half marathon while I knew that the others in this pack would be able to run a 1:11. I have no idea how clean this group rode the whole way but considering that the drafting zone is 10m I guess they should have been spread out over about 100m at this point at least. That wasn’t the case when I rode up to them though and that made it really hard to get away. To give you an idea I sat behind the group for about 30 seconds before I tried to pass and it took 150-200 more watts to ride a similar pace alone. Anyway I rode with David Thompson and Terenzo Bozzone for a while off the front before I surged away to make sure I got the prime. Those surges above threshold killed me though and the last 20 miles on the bike was a struggle though I managed to get a lead of just under 3min out on the run.

There’s not much to say about the run really as I just made sure to finish the last race of the season. Riding the way I did I knew I wouldn’t be able to actually race it on the run as well. I’m pretty happy with the season overall though and like to thank Cervelo, R&A Cycles, HED Cycling, Ergomo, Fuelbelt, Blue Seventy, Spiuk, Oakley, InfinIT and FIT Multipsorts for the great support during the year. I am already looking forward to and planning the 2008 season!

Bjorn
Posted by Recovox at 1:56 PM