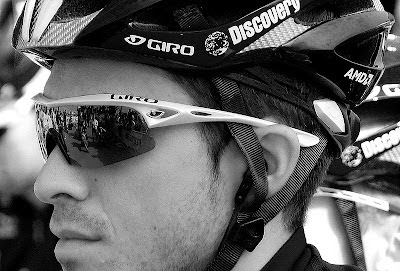 Alberto Contador is out to prove his 2007 Tour de France victory was no fluke.

The Spanish climber says he's ready to get back to the business of training and preparing for the 2008 Tour after a busy off-season that's included a seemingly endless stream of publicity appearances.

"With so many commitments I've hardly had time to rest, but I'm ready to get back on the bike and begin again from zero," he told MARCA during a break at an award's ceremony in Spain. "I need to stop these and get back to work."

Besides scores of post-Tour criteriums, Contador's hardly raced since his surprise Tour victory.

That will change in the coming weeks as Astana is set for its first team camp with new team manager Johan Bruyneel.

"I'll really feel it when the racing starts and I have all the world watching me," Contador said. "But I am also conscious that if I have the pressure it's because I've won and I tell myself, if I've won it once, I can win it again. That's what motivates me."

Contador has never been lacking of confidence. He was largely hyped as a future Tour winner when he shot out of the blue last year to step calmly into the void left vacant by the controversial departure of race leader Michael Rasmussen.

"I've always had self-confidence, but now, after the year I've had, I know that I can keep winning," he continued. "We'll see how things go. Before, I only dreamed about winning, now, after winning once, I dream of winning again. There are other factors, but I see myself with options."

Contador counted Astana teammate Levi Leipheimer along with Cadel Evans and Andreas Kloden as the most dangerous rivals. He also pointed to Andy Schleck and Thomas Dekker as possible surprises and also listed Alejandro Valverde, Carlos Sastre and Denis Menchov as would-be challengers to his throne.

"There's not just one, there are several," he said.

Contador said he hasn't had a chance to sit down with Bruyneel to plan his 2008 racing schedule, but added it likely wouldn't change too much from this season "considering that things went pretty well this season."

Last year, Contador won Paris-Nice and then built up his fitness through racing some select races leading into July. He also put a question mark on whether he'd race the Vuelta a Espana, which he also skipped this year.

What will change for 2008 are the Summer Olympic Games in Beijing. Although he's no one-day rider, Contador said he'd love to go.

"I've heard the course is very hard, though I don't know for sure, that there's a climb of 12km that's climbed six times," he said. "If it's true, then it could be good for me, though I wouldn't mind working for Freire and Valverde if the course isn't as hard as they say it is."
Posted by Recovox at 11:04 AM