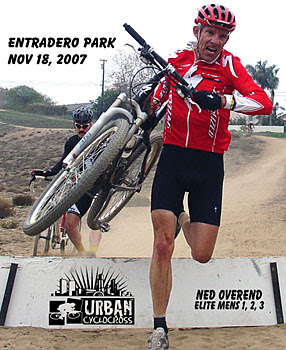 Adding to the excitement of flying bean bag turkeys being tossed for extra series points was the appearance of Ned Overland, the godfather of cross country mountain biking, for the elite men's race. The question of the day was how would "Deadly Nedly" – best known for his UCI Mountain Bike World Championship Gold in 1990 and Bronze in 1991 and six US National Mountain Bike Championship titles 1986, '87, '89, '90, '91, '92 – handle the infamous Entradero Park hill and the new turn with its three log barriers. Overend, racing for Specialized, put the hurt on the younger riders for most of the race but in the end it was Team Bearclaw's Fritz Bottger taking the win ahead of Jason Lowetz and Overend.

Another surprise took place in the Masters 45+ race. The addition of the 'cross friendly triple logs enabled the 'cross specialists to edge out the top mountain biker Eddie Arnet. Masters 45+ series leader Arnet fell behind Jim Pappe and Michael Longmire (who came all the way from Montana) to end up in third. But Arnet retained his series lead over Dave Hnatiuk.

A huge turnout of Shimano Youth racers 12 & under topped the day's attendance at over 150 riders. A random cash giveout by junior Duncan Reid to the elite men's category again entertained the crowd, particularly when Lyle Warner edged out Brandon Gritters for one of the cash grabs.

Urban Cyclocross Series Event #4 will happen at Camp James in Irvine, California on December 16. It will be hosted by Encore Cycling.