The Truth About Athletic Talent - By Brad Kearns 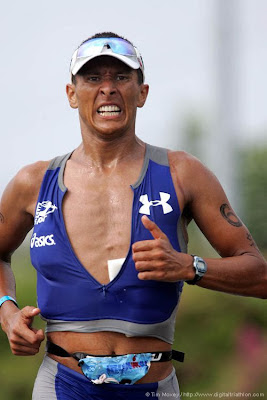 Talent is a funny and often misused word in the ‘talent vs. hard work’ paradigm to characterize athletes. Some athletes learn easily and excel quickly, even at new endeavors, so they are considered natural talents. Others excel in spite of lacking natural genetic attributes because they practice intently and display an outstanding work ethic. The picture seems sensible, but it’s flawed. It’s essential to expand our perspective to get more relevant use of the term talent.
Could it be that the most important and profound athletic talent is the talent to work hard and compete intently? To make the most of your genetic abilities? When I hear someone say, “That guy is so talented, he dominates the Cat III’s but hardly even trains!” I don’t think, “Wow, what a talent.” It’s more like, “Wow, what a punk. What a waste of natural genetic ability."

In my endurance career, I experienced a rapid improvement curve upon my introduction to distance running in high school runner and later as a rookie professional triathlete. My VO2 Max value was 81 ml/kg, which is considered really high, enough to say I had the talent and potential to be the #1 triathlete in the world. I also displayed a tremendous competitive spirit. However, I was also saddled with a glaring weakness - a lack of resiliency for training. I could train hard for a couple days or weeks, then I would become tired and have to rest, while others carried on, and on, and on. Triathlon greats like Mike Pigg and Scott Molina worked long and hard virtually every single day. After Olympic distance events on the pro circuit, Pigg would commonly fly home and then ride 100 miles on Mondays. My day-after routine looked a little different: I would fly home, sleep in till 10am, get a massage and then take a long nap. I was not ready for any significant training for several days. I had a lack of ability, or talent, to train at the level of the top athletes, which counted for far more than my superior VO2 Max test result.

Make no mistake - the genetic component of athletics is tremendously important. Special attributes like height, strength, speed and size are obvious pre-requisites for the various sports and positions at the elite level. In endurance athletics, the VO2 Max test (measures your ability to efficiently utilize oxygen, factoring in body weight) is considered a reliable predictor of performance potential. Dr. Max Testa, one of the pioneers of VO2 Max testing, says that VO2 Max results are 88% genetically determined. And that the trainability component (i.e. - get in shape and improve your VO2 Max) also has a strong genetic correlation. However, we often see the most genetically blessed athletes falling behind the performances of those with superior competitive spirit and work ethic.

The best definition of talent relating to athletics I’ve heard came from Dr. Glen Gaesser, professor of exercise physiology at the University of Virginia. During a lecture to athletes many years ago detailing VO2 Max test implications and other science-oriented topics, someone asked him how to identify the most talented athletes. He paused dramatically to allow everyone to poise their pens, and then he said, "Go to a race and stand at the finish line. Then . . . see who crosses the line first. There is the most talented athlete."

Or, as Testa says, "Genes determine who makes it into the peloton (the "pack" in professional bike racing), but not who wins the race." Truly superior athletic talents are people like Lance Armstrong, Tiger Woods, or Michael Jordan who possess the whole package: superior natural genetic ability, awesome work ethic and competitive spirit.

For more information on Brad Kearns visit - www.bradventures.com
Posted by Recovox at 8:07 PM