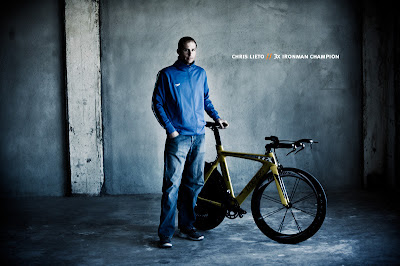 Everyone touts ze Germans when it comes to bike and overall prowess, and the results don’t refute that. But there has been one American that has been chipping away at the German foundation when he took a chance and went after eventual champion Normann Stadler late in the bike. His reward was a hard-end ninth-place finish in 8:27, his career best in Kona.

The defending Ironman Japan winner and top American at the 2006 Hawaii Ironman reflects on his ninth-place finish in Kona, his road to that result and looks forward to his 2007 season.

Xtri: We understand that your ninth-place finish last year, your best ever in Kona, was nearly a DNF. We’d have never known it based on how strong you looked out there. Can you explain what that was all about?

Lieto: You always look back and go “aw, I should’ve done this” or “what if I did this” but as far as almost pulling out, as you know, in Ironman you have your ups and downs. Coming off the bike I felt OK for the first mile, but the second mile, I had this intense pain inside.

And it’s one of those things. Ironman pain is so different, you can’t explain it. It’s a full-on heat from inside like you want to explode. It’s the most suffering you’ve ever felt. Sometimes within that moment it feels like you can’t do anything. And then it starts messing with your head. For me. I was in so much pain I had to stop a couple times. One time I stopped and didn’t want to go on because I was in so much pain.

So I dealt with that the first 13 miles, had some G.I issues. It gets to a point when you’re running along, and all you’re doing is looking for your family and friends. You look for them not for their encouragement or support to keep going, a lot of times you look for them to give you the o.k, that it’s o.k. if you quit. You look for those people because you don’t want to let them down. At that moment I thought, ‘when I see my wife, I’m gonna tell her how bad it hurts and that I want to stop,” and what I wanted was her blessing to do that. So you start looking for those things while in those depths of pain. Luckily, none of my loved ones wanted me to stop, so I kept going.

Just before that halfway point I saw (coach) Lance (Watson) and told him I wanted to stop, right after Palani, and he’s like ‘get your ass movin.’ Finally after mile 13 the G.I. stuff settled down, my legs felt better and from then on I negative split my marathon. The legs felt tired, but it was totally different. That pain was no longer there.

I’m proud of what I’ve done and pleased to be ninth and first American. It’s an honor. Did I want to do better? Yeah. Do I think I could have done better? Of course. But circumstances come up.

Normann Stadler passed you inside the first few miles of the bike. Did you have any impulse to go with him?

It was unexpected to see Normann so quick. You make a reaction, and my reaction was to let him go. That reaction should have been to go with him. I didn’t think he could last out there by himself the whole day, and he proved me wrong. He had a phenomenal ride and a phenomenal day. But by the time he got 30 seconds or a minute away, it was too hard to pull it back.

I don’t know if it would have been different if I had gone with him. I could have blown up or I could have raced well. I just don’t know. Trial and error. I’ll try some new things this year.

You were caught up in that pack of Normann chasers for a bit during the race, and I remember you sitting up in that group saying ‘this is too easy.” Do you have hopes the draft rules will change with a longer, wider draft box?

Well, rumor has it the draft zone is gonna change a little bit. If that happens, it’s gonna even out the field a little bit. The short time I was in that group, it was ridiculous. My wattage dropped just sitting there. And that was one of the things that I learned. By sitting in that group knowing if I sat in there, I was guaranteed a top position, probably top six I figured, based on who was in there, if I didn’t have to work that hard. It may have been a little naïve, but my goal was to do better than that. My goal was top three, and for me to do that, I needed to take a risk and try to go out on my own. I did that, and it didn’t quite work out last year.

What was your takeaway from that race?

As one of the marquee “bike specialists” in any Ironman, you’ve gotta be rapt about getting an early season of position testing with the Trek crew here in San Diego.

I’ve never been in the tunnel before so it’ll be a learning experience. I’m excited. This position has worked for me thus far, I’ve done alright, I’m just curious to see if there’s any free time I’m not getting out there. I’m excited to tweak around with it and work with Max Testa on my power, with Steve Hed and all the Trek guys.

Last year there were good odds on you—not based on your Ironman Japan win, but an 11th place general classification finish a the week-long Tour of Utah, beating the likes of top North American racers like Phil Zajicek, Chris Baldwin and Eric Wohlberg. How has a hard road race against top talent shaped your Kona lead-up last year, and can we expect the same this year?

I performed well there. This year I gotta do things a bit differently. I got a lot of fitness out of Utah and I had a lot of fitness going into Utah… and I don’t know if it was too early, if I was able to hold that same fitness. I was able to push myself really hard in some races, and I had a hard race following that one, and I may have dug too deep and not had the reserves for Hawaii. I have to look at what races I do and utilize those road races for strength, to make sure the end result is always looking out for Hawaii.

How does your season stack up this year? Will you have another Kona-prep road race as you did doing the Tour of Utah last year?

My plans this year are to focus on Hawaii. It gets to a point where it’s everyone’s focus. Every year I’ve learned a little bit more and especially after last year my confidence is better. This year I want to go in and make sure I’m prepared.

With that in mind, I’m doing Ironman Japan again this year and using it as a testing ground to try some new things in the race, and apply that same philosophy to Hawaii if it works out.

As for other races, I’m looking at Wildflower, some short-course races, maybe Chicago and L.A., just to test and increase my running speed.

Care to make any bold predictions like the previous year’s top American in Kona, Cam Widoff, who finished three spots behind you in 12th last year?

Naw, naw…(laughs). No, nothing like that. But I feel I can do really well there and improve upon my position this year. It all depends on how the cards play out.
Posted by Recovox at 2:55 PM