Basso back racing in Italy 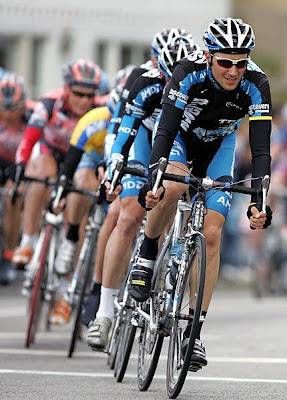 Wednesday's start of the 42nd Tirreno-Adriatico will mark Ivan Basso's second race of the year, following on his debut in the Tour of California, and his first on home soil since being barred from the Tour de France due to the Operación Puerto investigations. The 29 year-old rider from Cassano Magnago knows he will have his work cut out for him; believing that, even if he starts off 'bad,' he will finish with good form.

"I don't feel any particular emotions for this return [to Italy]," said Basso in an interview with La Gazzetta dello Sport. "You know why? It is not the time when I feel close to my people. I know that they are impatient to see me up close. But the fans essentially want me in two races, the Giro and Tour, and I will be there."

He made a rocky debut with his new team, Discovery Channel, in the Tour of California. Unfortunately he was caught up in a crash in stage one that resulted in his knee being banged. At first he did not think it was such an issue. "I have to say that the problem is a little more complex than I originally thought. The swelling in the right knee has put abnormal pressure on the tendons, but two MRIs have excluded any serious problems."

After making his re-entry into Europe, Basso took five days to recover and has slowly built his form for Tirreno and the races to come. "I came back and worked gradually, without any specific training. I continued going at a rhythm of 85 to 90 RPMs on rides near my home. Then, at the end of last week, I increased the work-outs. Today I rode for five hours," he indicated.

"I want to listen to my body here in Tirreno and understand the race sensations I have; not force it, above all in the first days. You should not be amazed if in the finale the group makes a high pace and I am dropped, but one or two teammates will always be with me." Basso pointed out that he will have certain objectives in the Corsa dei Due Mari. "I don't want to hide out. If the first day goes OK, the second better and the third... It is clear that I will give my all in the time trial [Stage five - ed.]; racing without risking it is useless. This race I will have to start 'male' (bad - ed.) and finish well; not the other way around."

After Tirreno, Basso will make his way to Milano-Sanremo on March 24, and then the Vuelta a Castilla y Leon, 26 - 30, skipping the Critérium International, which he won last year with Team CSC. "It is a longer race, five days instead of two, there is a mountain top finish that will be of use and also the time trial will be a good test," he reckoned. "This will also give us more time to decide if we will do a mountain camp and preview the key Giro stages."
Posted by Recovox at 9:28 AM