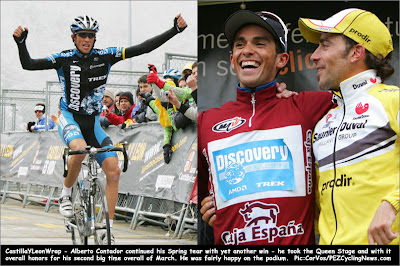 At 162 kilometers in length, including two categorized climbs, today’s final stage of the Castilla y Leon race in Spain was set to be another hard day in the saddle as Team Discovery Channel looked to defend Alberto Contador’s overall lead. However, with a roster including powerhouses like Leipheimer, Basso, Martinez, Brajkovic and Danielson, the Team was clearly suited to control a mountain stage, and they did just that, leading Contador to the overall victory and third place on the day.

Sports Director Johan Bruyneel did not specify a team leader coming into this weeks’ race, instead looking to see which of his squad had both the fitness and motivation to take control. Bruyneel stated, “Our entire team continues to impress me this year. Although it was Contador winning here in Spain all the guys are looking great, not just those on the podium. The classics riders like Gusev and Devolder are preparing well for the coming weeks. Tom and Levi look good for Georgia and Ivan is showing good fitness as he prepares for the Giro, although he lacks a bit of top-end speed right now. Overall, all the guys are performing better than expected and I could not be happier.”

Contador was pleased with his continued good form this week, saying, “I was a bit unsure of how I would feel yesterday on the climb. I worked very hard to win Paris-Nice and you never know how much you will have left in your legs. In the end, I had just enough to win. Now I think I will take a short break from racing to recover and start to prepare specifically for the Tour. I want to be my best in July.”

Team Discovery Channel will take to the road next in Belgium at the Three Days of De Panne.
Posted by Recovox at 10:07 AM