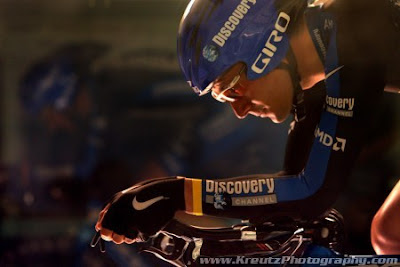 New Discovery Channel signing Ivan Basso continues to use the early season to work out the kinks with his new team and new equipment. Cyclingnews European Editor Tim Maloney visited Basso during his latest round of wind tunnel testing to see what the Italian star has been up to.

In his first race since winning the 2006 Giro d'Italia, Discovery Channel Pro Cycling team rider Ivan Basso had a respectable ride in the Tour of California last month with a 49th spot in the final general classification as well as a ninth place finish in Stage 5's windy 23.5km Solvang ITT.

Basso may have completed the race on February 25th, but his work was still far from over as he headed for a session at the San Diego Air & Space Technology Center's low-speed wind tunnel the following day to fine-tune his TT position. Cyclingnews spoke to Trek road bike product manager Scott Daubert about the art and science required to eke out every second for the Italian rider as the challenge of the Grand Tour time tests loom in the coming months.

His abilities on the bike notwithstanding, Basso's pleasant demeanor continues to make the job of his support crew that much easier. "Well, I'd only seen Ivan from afar during the Tour of California, so I didn't get much of a sense of his mindset until we met at breakfast the day after Levi's win on the morning of the 26th," said Daubert. "It was 6:30am and Ivan came to breakfast and walked around our table, giving a gentle "ciao" with each hand he shook. I was at the table with aero guru Steve Hed, Trek bike fit specialist Michael Sylvester, Trek's new team liaison Ben Coates and Trek engineer Mark Andrews. Ivan's amiable early morning demeanor spoke volumes to us of his heart and dedication to the sport of cycling and to life itself. Sometimes it only takes a simple greeting like on that morning to be won over. So I'm a big Basso fan now. Ivan was in a good mood that morning, even though his right eye had been bitten by something during the night and was swollen shut. He was sort of embarrassed by his looks but had good enough humor to laugh about it."

Between Lance Armstrong and the US Postal / Discovery Channel teams, Daubert and his team at Trek have likely logged more time analyzing TT positions in the wind tunnel than any single group in the bicycle industry. By now, the process was quite well defined, but team manager Johan Bruyneel still had some specific input on what he wanted to see from the session. According to Daubert, "We knew from Johan's direction that we needed to explore the high hand position that Floyd [Landis] used in 2006 for Ivan. Levi is using a similar set up with great success, as suggested by Steve Hed in our November 2006 wind tunnel tests, so I suspected Johan wanted to know more about the position's benefits. Ivan also was interested in looking at the high hand position as we got rolling in the tunnel. It was clear Basso understood exactly how the day would progress, because he was focused and ready to go as the tunnel's test table was zeroed."

Aerodynamics guru Steve Hed has closely collaborated with Trek in its wind tunnel sessions over the last few years and Daubert has extraordinary admiration for him: "Bless the guy! Hed has so many ideas clamoring around in his head that he sometimes confuses the rest of us - and we even speak the same language! Imagine what Ivan was thinking as Hed poked and prodded, adjusted and suggested during the session. At one point I was watching the exchange between Ivan and Hed and realized that Basso had lost the plot. But luckily, Trek sponsored triathlete Chris Lieto was scheduled in the tunnel after Ivan and Chris had brought his trainer, Dr. Max Testa, to observe the session. So I asked Dr. Testa to help with the translations with Basso. My Italian is good enough to recognize that Ivan had interest in what Hed was saying, but also that he was confused. So Dr. Max Testa helped us out several times during the day so we owe him a big thanks!"

In somewhat atypical fashion in comparison to other riders, Basso showed a strong interest in the hard science surrounding his test session. Daubert added that, "Ivan makes an effort to understand the situation at hand. In a move that I've never seen other riders do, Ivan wanted to look at the raw data produced by the tunnel. The printout sheet is columns of numbers that mean very little unless you know what to look for. Hed explained the important parts of the data to Ivan, so after each set of runs, Ivan would come to the control room for a discussion."

Basso's existing position proved to be quite excellent already, but the results of his first wind tunnel test session with his new Discovery Channel team suggested that some very minor changes may still yield some additional time savings. Still, Daubert was careful to instill any false hopes, saying, "We tried to relay to Ivan that there are no guarantees here at the tunnel; it's only a simulation. But Ivan had no illusions and promised to put time riding in the new position during his training rides at home in Italy, so he can feel for any improvements. We didn't find any speed in the high hand position, nor did we make any huge changes to his saddle height or fore/aft position. Most of the time we found is related to his hand and head position which makes it easy for him to practice at home. Ivan won't have to make radical adjustments to anything in his TT position."

After the wind tunnel testing, Ivan had to catch a plane back to Italy that evening. "There was a rush at the end of the test and I only had a quick moment to ask Ivan if he was satisfied with the day and what we found," Daubert said. "He confirmed to me that it's probably unrealistic to expect a miracle. I believe Ivan values what we learned in the tunnel despite the pains of coming all the way to America, testing the day after a hard stage race and then having to listen to far-fetched ideas (in a somewhat foreign tongue). He's a trooper."

Unfortunately, a hard crash in Stage 3 of Tirreno-Adriatico forced Basso to abandon the race prior to the individual time trial two days later so he was unable to test his newly refined position in competition. Obviously, though, the season is still quite young and Basso will have more than ample opportunity to see if his efforts in the wind tunnel will have paid off.
Posted by Recovox at 12:46 PM