Basso Faster On A TTX Than A Cervelo P3! 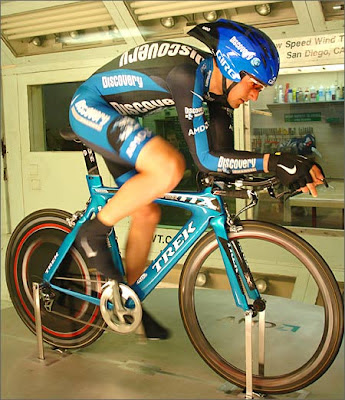 What can be said is that the result of the time spent in the tunnel exceeded the goal that the crew had at the start of the test. That was to at least be equal to the equipment available to Ivan last year. The assumption by Ivan and not immediately discarded by Discovery and Trek was that CSC and Cervelo had done as good a job as possible with Ivan. While they did do an incredible job, in a head to head comparison, with very few and only minor changes, Ivan has simply been made more aerodynamic on the Trek TTX that he was on the Cervelo P3.

There are two 50k plus TT’s in the Tour this year and the gain for Ivan on paper, over these TT’s was larger than the difference between winning and finishing off of last year’s podium (as it stood the day the Tour ended anyway).

Conditions change and the most important of conditions is the rider’s physical ability, but the value of testing is undeniable at the top of the sport now. The benefits of testing are only as good as the quality and focus of the test facility and staff though, and San Diego’s Low Speed Wind Tunnel is at the pinnacle of what’s available for our sport…
Posted by Recovox at 8:12 AM