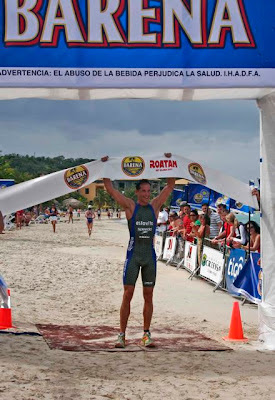 “It is awesome to go to my first ITU Continental Cup and come away with the victory. I think I may have surprised a couple people.”

I arrived on Friday afternoon and relaxed for a little while before heading out to check out the race course.  I swam in front of the Hotel where the race was held. It looked like the swim was going to be a smooth, clear, and straight forward. Race day revealed something different.

Then I headed out to check out the bike course. I realized that the start of the bike is on a gravel road.  Literally we had to ride on and gravel dirt road for about 400 meters then you make a left turn and immediately start climbing a 16 % grade climb.  And if that is not bad enough within another 400 meters that turns into a 20% grade climb.  After about 5k of climbing up and down you reach a "flatter" road that has rolling hills, which on race day we would ride for 2 loops of 15k.  I enjoyed my "easy warm up ride and then headed back over the hills to get back to my room.  I couldn't wait till tomorrow to find out what adventure the run course had in store.

Friday night I found myself in the dark trying to find my way around my hotel room.  The Island of Roatan was going through power savings so each day the power on the island would be turned off for a minimum of 5 hours.  Luckily they supplied each room with a candle.  This made for an interesting, but island style way of doing things.  I made the best of it and enjoyed the island spirit.

Saturday I woke up at sunrise, around 5:30, and headed out for an early swim.  It was so nice and quit.  It was like I had the ocean to myself.  Just as I was getting out of the water the rains hit, and hit hard.  within minutes the walkway was flooded and big puddles were forming everywhere, including the transition area for the race the next day.  The empty dirt lot next door that was to host our transition area with our bikes and run shoes was now a huge muddy lagoon.  Change of plans were in the works for sure.

With a little clearing in the sky I bolted out the door to run the run course and see what it was going to be like on race day.  Turns out that it is more like an xterra off road run course.  A little section of pavement then off into the jungle and up a single track trail with roots and vines all over the place.  You come out of the jungle onto another short paved section till you hit dirt then grass and don't forget mud.  I laughed to myself and couldn't wait for the adventure on race day.

I got back from the run to no power again and decided it would be a good time to take a nap. When I woke up it had stopped raining so I figured I should get out to the bike course one more time.  This time I got a ride up the hills from Ivan,  an Argentinean man that was living on the island for the last couple months.  It turns out that he was going to be the photographer on race day.  A great guy that helped save my legs for race day by pulling me up the steep climbs.  Thanks Ivan!

Race morning I woke up to a down poor and no power as expected.  I had my breakfast and headed down to the race.  Just as I was setting my stuff up in the new transition area in the middle of the gravel road it stopped raining.  That was a great sign in that I think the race would have been postponed if the rain kept up. I got a good warm up in and soon found myself on the start line on the beach.

Off we went in to the beautiful water. The swim was fast, and for about 3/4 of the way I was still with the lead group as we turned to head back.  Within minutes the group splintered in different directions and some of us stayed straight heading back to the beach, but we soon found ourselves on a shelf of corral reef.  The water was about 6 inches deep and no where to go but over it. I tried to stay as flat as possible on-top of the surface of the water and used my hands to crawl across the reef trying to keep my toes from dragging on the bottom.  Finally we made it through but lost about a minute to the leaders out of the water.

Onto the bike and up the hills I worked my way through the field and up to the lead group of 4.  By the time I caught them we were on the flatter rolling section of the course.  I tried to get away with no luck so I rode with them for another 5k and took my turns of pulling. Then on a small hill I attacked hard and got a gap of about 10 seconds  At that point it was keep my head down and ride. With the bike course being rolling and with lots of turns I could get out of sight.  In the next 7k I put a minute on them and at the next 8k I put another 30 seconds or so. The last 15k home which included that last 5k with the big climbs I extended my lead to a total of 3 minutes starting onto the xterra like run.

The next leg of the adventure began through the jungle and sliding in the mud.  It was hard to get any sort of rhythm on the run, but any short paved section I would try and find that rhythm.  It wasn't until 1/2 way through the run I could see my competitors and that was the first time I had a chance to see what my lead was after coming off the bike.  I was till about 3 minutes up and was very happy with that as the heat and humidity got worse.  I stayed focused on my run and couldn't wait to get to the finish line, but not before jumping in the ocean for dip just 100 meters from the line.

It was a great race with a lot of Island spirit and laid back atmosphere.  What a great and exciting way to win my first ITU event.  The race organizer Leslie and her group were great, and put on a perfect race with everything from the rain and mud thrown at them.
Posted by Recovox at 1:05 PM