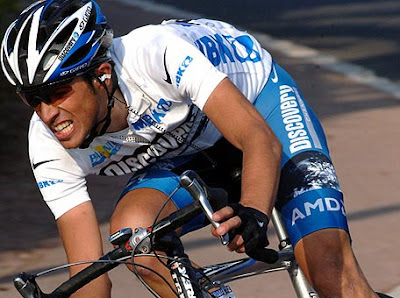 It was time to climb into the mountains today and shake up the General Classification for the 22nd Vuelta a Castilla y Leon on the next to last stage of this year’s race. With six Discovery Channel riders starting the day in the Top Ten there could be no doubt in the peloton’s collective mind that the team would be riding to move someone to the head of the class.

A group of eight stayed away for much of the race with race leader Vladimir Karpet’s team of Caisse d’Epargne heading up the chase behind and eventually making the catch. As the peloton closed in on the slopes of the climb two more riders attacked off the front. The Discovery Channel riders decided enough was enough and moved to the front to gain control of the race and neutralize the duo’s effort. Looking powerful and strong, the boys in black and blue were on a mission.

At 4km to go Saunier Duval rider and climbing specialist Koldo Gil took flight with Karpets unable to respond to defend his lead. However, one of DC’s own climbing aces Alberto Contador had the legs and went right along with Gil. Racing side by side in a pure display of racing tactics, first Gil would go with Contador quick to counter. Next Contador would push it with Gil sure to respond. At the line Alberto Contador nipped Gil by half a bike length to take an exciting win on the top of Navacerrada and grab the leader’s jersey in the process.

With others in the group feeling strong legs as well, Discovery Channel’s Ivan Basso, Levi Leipheimer and Tom Danielson followed in quick order just a few slots back on today’s climb. It was another show of teamwork and fine form from the DC riders today. “We call that Plan A,” quipped Danielson after the stage. Yes, perfectly executed.

Tomorrow’s final stage contains both a Cat. 1 and 2 climb with just a slight little kicker at the very end. Look for Discovery Channel Pro Cycling Team to control the race throughout the day to seal another win for Alberto Contador.
Posted by Recovox at 9:56 AM