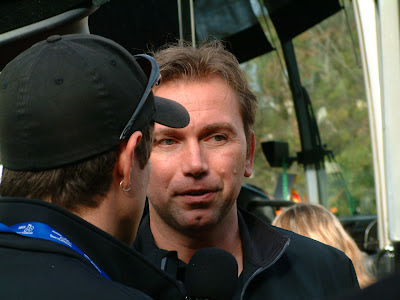 Soon we will begin the 65th edition of Paris-Nice, the first stage race of the season often called the "race to the sun" as very cold temperatures in the beginning usually lead to very nice weather once we get to the south of France. For the Discovery Channel Pro Cycling Team, our goal is very simple: we are sending a very strong team – as are all the Pro Tour teams – and we have to go there to win.

Normally Alberto Contador would be our designated team leader. Paris-Nice is a Spring goal of his, and he's in good shape and very motivated, especially after his recent stage win at the Tour of Andalucia. But the team we're bringing is very strong and a lot can happen in the first few stages that could alter who we ride for. Our plan is to be an attacking and aggressive team that takes the race to the peloton. I want to see our riders in all the key breaks, and so in addition to Contador I expect to see strong performances from the likes of Levi Leipheimer, Tom Danielson, Stijn Devolder, and Yaroslav Popovych.

Where will the real battle occur? Look to Stage 4, the road to Mende, the same route that we used in the Tour de France two years ago. If all things are stable by then, I expect Contador to fly and be very good that day. Speaking of battles, many of you are aware that there has been a lot of controversy regarding Paris-Nice and the riders / teams participating. As far as I am concerned, the controversy is over and it is good that everyone is willing to talk; the atmosphere is a lot better than it was just 10 days ago.

It's our first big challenge on the European Pro Tour, thank you for your support and we will race to win! - Johan