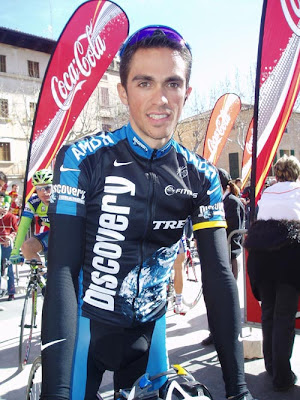 Alberto Contador gave Discovery Channel its first win of the season on European roads after taking an impressive victory in Friday's 162km stage of the Volta a Comunidad Valenciana.

The Spanish prodigy outclassed the likes of Damiano Cunego (Lampre) and Alejandro Valverde (Caisse d'Epargne) in the seven-climb "queen stage" that ended with the short but steep Cat. 1 summit at Alt del Campello.

Valverde finished 13 seconds back to sneak into the leader's jersey thanks to time bonuses and could walk away with the overall title with just one sprinter's stage left. Tadej Valjavec (Lampre-Fondital), third in the stage with the same time as Valverde and Frank Schleck (CSC), sits second at two seconds back while Contador started the stage 1:55 back.

"My top rival will be Valjavec because he can count on a strong team that works well in the sprints," Valverde said. "The dangerous thing won't be the sprint but to be in position, but since we're defending the leader's jersey, we'll play it."

The leaders built up a gap of nearly five minutes and de la Fuente grabbed the mountain points, but it wasn't going to be a big enough head start. The main pack snuffed the move with about 15km to go.

Overnight race leader Daniele Bennati took over the front to up the pace as the peloton curled toward the steep, 4km climb up Alt del Campello to soften up the bunch for Cunego. The 2004 Giro champion opened up a small gap, but his adventure ended with about 3km to go with the peloton splintering in his wake.

Contador shot away with about 3km to go and left everyone gasping to keep up. Valverde, Schleck and Valjavec led the chase with Janez Brajkovic (Discovery Channel) marking the move.

"The stage was very hard but we had a teammate ahead in the break and we didn't have to work until the final, even though our team did a great job," Valverde said. "The last part of the race was complicated because I was pulling the entire time against the wind, even though I saved a little to have the final spark because I knew if I pulled too hard they would pass me in the sprint."

With Saturday's finale into Valencia tailored toward the sprinters, Valverde will have to keep his eye out for trouble, but looks to conclude his first stage race of the 2007 season on a winning note.
Posted by Recovox at 1:57 PM