Erin Densham Another Aussie To Watch 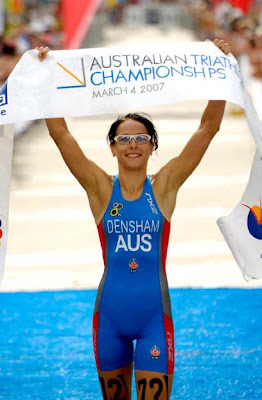 IT'S a measure of Erin Densham's growing success in triathlons that the world under-23 champion yesterday quit her job as a part-time cashier.

After winning the first two open races of the domestic season, in Perth and Hobart, Densham has decided it's time to get serious and devote herself fully to the sport.
"I've been working at Big W for the last six years," she said yesterday.

"But I just quit today. I found it really hard trying to be a professional athlete and then rushing into work.

"It was hard to be on my feet for eight hours and then have to turn around and train. I wasn't recovering too well.

"I'm going to put it all in one bag now and see where I can take it."

Densham, 21, who moved from Sydney four months ago to train in Melbourne under VIS coach Jonathan Hall, has had to reassess her goals after a big start to the season.

"But because I've started winning a lot of people have been asking me about it."

Densham said she had been surprised by her smooth transition to open ranks since winning the world under-23 championship in Lausanne, Switzerland, in September.
Posted by Recovox at 8:21 PM