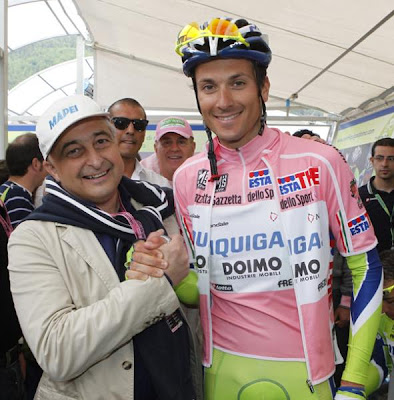 Aldo Sassi has claimed that he can guarantee that the seven riders he coaches are not doping. The Italian, who oversees the training of Ivan Basso (Liquigas-Doimo) and Cadel Evans (BMC), was speaking in response to comments made by CONI anti-doping investigator Ettore Torri on the pervasiveness of doping in cycling.

“In the bible, the prophet Jonah speaks to God of the city of Nineveh, which is overrun with criminals. ‘How many just men are there?’ they ask. Maybe five. ‘Then I won’t destroy it,’ said God. In my cycling Nineveh, I can count on seven just men,” Sassi told Gazzetta dello Sport.

Sassi is currently fighting cancer but he insisted that the idea of his riders being doped would be more troubling than his illness. “If they were doping, it would be an even stronger mortal blow than the tumour in my head,” Sassi said.

“Torri maintains that nobody is clean, but I say that’s not true,” Sassi explained. “It’s for this reason that I continue to work in cycling. You can ride and win a Giro even without doping.”

Sassi is head of the Mapei training centre in Castellanza, which was initially set up as the dominant Mapei squad’s training facility in 1996 and has been opened to all since the team disbanded in 2002. Currently, Katusha use the centre for testing, while Lampre will also avail of the set-up in 2011.

“We create programmes to help the team doctors with their analysis of haemoglobin mass,” Sassi said. “By checking this data against the biological passport, you can see if someone is stepping out of line. It’s not anti-doping but we can obtain suspect data and relay it to the team.”

The centre also offers training programmes, “but only for those who show themselves to be truly convinced, otherwise it’s not worth the bother.” Cadel Evans has been under Sassi’s stewardship since his days at Mapei, while Ivan Basso began training with him in 2008 as he began his comeback from suspension for his involvement in Operacion Puerto. After initially denying his links to the affair, Basso eventually admitted that he had been in contact with Dr. Eufemio Fuentes but continues to claim that he had merely "attempted doping." He won the Giro d'Italia in May.

Sassi recently stated that he would even be willing to work with Riccardo Riccò (Vacansoleil), but only if he submitted to the Mapei centre’s way of operating.

Sassi also spoke to Gazzetta dello Sport of his involvement with Francesco Moser’s successful but controversial world hour record attempt in Mexico in 1984, where autologous transfusions formed part of the preparation. Professor Francesco Conconi was Moser’s trainer, while Sassi was part of his backroom team, along with Dr. Michele Ferrari.

“According to the codes and procedures of the time, that wasn’t doping but it did modify fair play and could have been a health risk,” Sassi admitted, before attempting to offer a justification. “We knew that it was a short cut, a trick. At the time, the autotransfusion was considered an application of science in sport. Then it also came to be exploited as a means of power.”
Posted by Recovox at 6:07 PM