Matt Damon to Tell the Story of Lance Armstrong 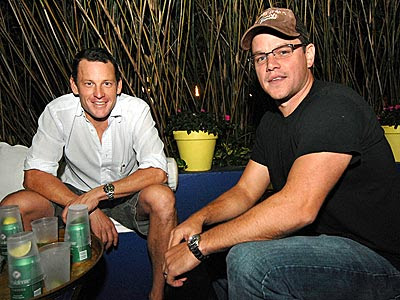 Matt Damon is set to play Lance Armstrong in a long-gestating biopic about the Tour de France champion that may never get made.

But he'll be connected to the star athlete in another filmic way: Damon will narrate the new documentary about Armstrong from Oscar-winner Alex Gibney.

Gibney, whose Eliot Spitzer nonfiction film "Client 9" is coming out next month (more on that in a later post), centers his Armstrong movie on the cyclist's much-touted comeback at the 2009 Tour de France.

Gibney sees in Armstrong a figure both complex and polarizing. "There is, at least from the public perspective, a big disparity of opinion on him. Some people hold him up to be a saint. Particularly if you're a cancer survivor or cancer patient, he provides enormous hope," Gibney says. "Other people see in him a kind of hypocrisy, and hypocrisy drives people crazy, particularly if they make money off it."

Gibney is pulling a bit of a switch with the comeback tale. The director has often been preoccupied with powerful people brought low, as he was in the Oscar-nominated "Enron: The Smartest Guys in the Room" and the Spitzer doc. He also directed the Afghanistan torture movie "Taxi to the Dark Side," which won the Academy Award for best documentary.

With a recognizable voice and a clear (and at times itself polarizing) interest in current events, Damon has been moonlighting as a documentary narrator quite a bit lately. He narrates the current financial-crisis doc "Inside Job" and did the same on the 2008 water-crisis doc "Running the Sahara."

Gibney says he chose the actor because he knew many cycling fans were aware of Damon's attachment to the Armstrong feature and wanted to give them another point of connection to the story. The movie, incidentally, has been in development for more than six years, with veteran producer Frank Marshall ("Back to the Future," the Bourne movies) set to direct, but at this moment the film doesn't have much, er, forward momentum.

Meanwhile, the Armstrong doc, which is set to come out next year, becomes more timely as doping scandals grow — disgraced Tour de France 2006 champion Floyd Landis has accused Armstrong and others of doping, and three-time and current champion Alberto Contador risks being stripped of his title because of a failed drug test — developments that also make Gibney's movie a moving target.

The filmmaker, who is mostly done shooting but is still talking to some subjects, says this makes for hard but necessary choices. "At some point, the only thing you can do is make up your mind on when the story ends," he says. "If you try to put in too much, the film will just go on forever."
Posted by Recovox at 11:41 AM