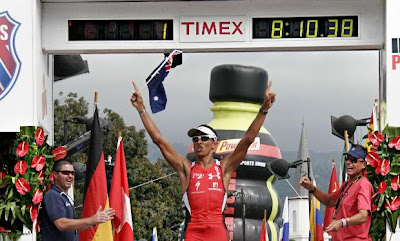 It was an Australian sweep at today’s Ford Ironman World Championship when Chris “Macca” McCormack and Mirinda Carfrae claimed titles in Kailua-Kona, Hawai’i. McCormack, who won the event in 2007, added a second World Championship title to his resume when he finished in 8:10:37. Carfrae secured her first-ever Ironman title when she crossed the line in 8:58:36, the fourth-fastest women’s time ever set in Kona.

McCormack excelled over an impressive men’s field including two-time defending champion, Craig Alexander (AUS), Chris Lieto (USA), Andreas Raelert (DEU), Marino Vanhoenacker (BEL) and Raynard Tissink (ZAF). Andy Potts (USA) exited the water first, but Lieto, Andreas Bocherer (DEU) and Maik Twelsiek (DEU) pushed ahead early on the bike to build a gap on the men’s faster runners. McCormack took the lead 11-and-a-half miles into the run, and although Raelert caught up from miles 22 to 25, a last-minute surge awarded McCormack the win. Alexander posted the second-fastest run split of the day, but could not make up his deficit from the bike.

Last year’s runner-up, Carfrae dominated a women’s field that included Ironman 70.3 World Champion, Julie Dibens, Virginia Berasategui (ESP), Caroline Steffen (AUS) and Rachel Joyce (GBR). While Joyce was first out of the water, Dibens made her way to the front within the first 12 miles of the bike and maintained the lead throughout the 112-mile course. Carfrae was 11 minutes down when she entered T2, but ran her way to the lead by mile 16 and set a new run-course record of 2:53:32 in the process. Switzerland’s Karin Thuerig, the 49th woman out of the water, finished the bike in 4:48:22, breaking Paula Newby-Fraser’s 1993 record by eight seconds and finishing sixth overall.

Nearly 1,800 athletes representing more than 45 countries and almost all 50 states officially started the Ford Ironman World Championship, which consists of a 2.4-mile swim, 112-mile bike and 26.2-mile run on the Big Island of Hawai’i.

Competitors ranged in age from 19 to 80 years old. The Emmy Award-winning Ford Ironman World Championship broadcast will air on NBC on Dec. 18, 2010, from 4 – 6 p.m. EST. Check local listings and ironman.com for details.
Posted by Recovox at 12:49 PM