Can Livestrong Survive Lance Armstrong and a Doping Scandal? 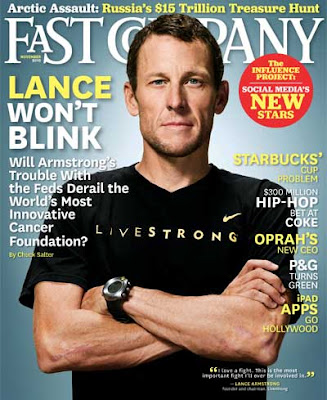 On a Sunday night in late July, a trio of bouncers stand outside a chic club near the Champs-Élysées, in Paris, checking guests for a special bracelet with a black plastic charm of a No. 28 cycling jersey. Inside, a red and white logo-festooned racing bike is on display like a sculpture. The absence of a rider is appropriate: This is the post-race celebration for Lance Armstrong's last Tour de France.

He's just finished a humbling 23rd in a race he's won seven times. But the mood at the Team RadioShack party is upbeat. Longtime Hollywood producer Frank Marshall is there. So is surfing superstar Rob Machado. CNN's Sanjay Gupta. Twitter investor and entrepreneur Chris Sacca. Executives from Google and Sony. A U.S. ambassador. The Champagne flows.

In the midst of the VIPs, working the room furiously, is Doug Ulman, the 33-year-old president and CEO of the Lance Armstrong Foundation, better known as Livestrong. It was Livestrong that was the real winner at the Tour. Nike had lined the course with Livestrong banners and covered it with supporters' messages in bright yellow paint ("Lost my leg but not my courage"). Yellow rubber bracelets were everywhere. A controversial stunt that morning, in which Armstrong and his RadioShack teammates broke Tour rules by donning black jerseys to honor the 28 million people worldwide living with cancer, had become big news on the biggest day of the Tour.

Armstrong arrives around 11. Dressed in an elegant dark suit and white shirt, he's the last rider to take the small stage and address the crowd. All those years when the leader's yellow jersey was his personal uniform, he mostly avoided crashes. Not this time: "It all caught up to us this year," he says, perspiring under the lights. But he smiles, takes a few photos with the team, and talks about what the Tour did for his cancer campaign. "I wanted to take the Livestrong message around the world," he says. "You could not have brought more attention to the issue today."

Then he disappears into a curtained-off area. "I was thinking, I can't wait to get out of here," he tells me later. He was headed to the Bahamas on vacation with his family.

What no one at the party mentions is the legal shadow lingering over Armstrong. Since May, federal investigators have been exploring whether he used performance-enhancing drugs while winning his Tour titles. He proclaims his innocence, as he has in the past. But the special agent in hot pursuit is the man who put Olympian Marion Jones behind bars and made a name for himself by exposing baseball's steroids scandal.

Unlike the cases involving Barry Bonds or Roger Clemens, there's more at stake here than one athlete's reputation. Armstrong is not only "the most famous cancer survivor in the world," in the words of John Seffrin, CEO of the American Cancer Society. He is also the inspirational figure behind the most entrepreneurial foundation in cancer, a critically important health-care movement that helped win $3 billion in new funds for cancer research and prevention in Texas alone.

While its $50.4 million in annual revenue is less than what the 97-year-old American Cancer Society raises in a month, Livestrong has been a catalyst for better cancer care and education across the globe. "It's a force to be reckoned with," says Leslie Lenkowsky, a professor at Indiana University's Center on Philanthropy. Livestrong's help line, guidebooks, and website helped more than 400,000 people last year. Its social-media efforts reach about 3 million supporters. It has pioneered programs here and abroad for survivors; worked to unify the fractured cancer community; and instigated a worldwide crusade, which includes the United Nations and the Clinton Global Initiative, to make the world's No. 1 killer a health-care priority. "I can't think of an organization with the breadth of activity that the foundation has," says Dr. Larry Shulman, chief medical officer at the renowned Dana-Farber Cancer Institute in Boston, "and that includes the American Cancer Society."

Which puts Armstrong, and CEO Ulman, in an uncomfortable position. The two are "soul brothers," as one Livestrong sponsor puts it: both cancer survivors, both highly competitive and disciplined athletes, both bright, passionate, and charismatic activists. "If we want to talk about cancer or go out and have beers at happy hour, that's fine with me," Armstrong says. Together they have built something remarkable. Armstrong attracts attention and supporters; Ulman melds them into a powerful community.