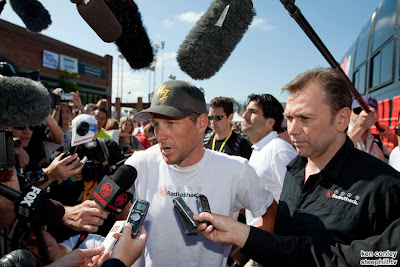 Tour de France champion Alberto Contador could very well wiggle free from a brand new anti-doping test that detected metabolites of plastic in his urine, a sign he may have received banned blood transfusions.

But the fact that the test exists probably spells even bigger trouble for Contador's rival and predecessor on the top step of the Tour de France podium, Lance Armstrong, who is the subject of a federal grand jury investigation into doping conspiracies on his teams.

Armstrong has left blood and urine samples in laboratories all around the world, often announcing the tests in his Twitter feed. Many of those specimens are in storage, where they are fair game not only to anti-doping agencies but to the federal law enforcement agents who have zealously pursued Armstrong since May, when his former teammate, Floyd Landis, accused Armstrong of organizing systematic doping on the U.S. Postal Service cycling team.

Armstrong has strenuously denied Landis' claims that he and his teammates won races by reinfusing their own blood. The method is thought to have gained popularity in cycling since 2000, when anti-doping authorities developed a urine test for the endurance-boosting anemia drug erythropoetin, or EPO.

Which man is lying, Landis or Armstrong, is a mystery that could be settled by the new test, which detects traces of plastics from blood bags. Anti-doping experts say the test could work on preserved samples.

"Nothing that I've seen suggests that (the metabolites) would break down during frozen storage," said an anti-doping expert familiar with the new test. "I can't see any reason why they would break down. They're not a biological molecule, like EPO or testosterone, they're a completely stable, synthetic molecule."

The federal grand jurors investigating Armstrong would need only a subpoena to apply the new test to the cyclist's old urine; the U.S. Anti-Doping Agency has tested Armstrong at least 15 times in the last three years. To get samples overseas, prosecutors would merely have to file paperwork known as "letters rogatory," according to former federal prosecutor Bradley Simon.

"We have no concerns at all about it," said Armstrong's spokesperson Mark Fabiani.

The new test, which was developed in some secrecy over the past two years, measures three different metabolites of di-(2-ethylhexyl)phthalate, or DHEP, a chemical that leaches out of plastic containers into the fluids they contain.

In recent months, the test was performed on samples provided by Contador, and scientists found a sudden spike in the metabolites, a person familiar with Contador's case told the Daily News.

"There's enough samples to show a clear pattern," the person told the News. "They increased and they decreased afterwards in a way that you would expect if a transfusion occurred. . . . It's nothing like the levels that you would get from day-to-day exposure."

Because the plasticizer test is not yet validated by the World Anti-Doping Agency, there is not an official threshold set for how much of the metabolites are allowed in an athlete's system. According to the person familiar with Contador's case, his tests revealed fluctuating levels, and more than could be explained away by heavy exposure to water bottles or other plastic products.

Contador, a three-time winner of the Tour de France, has denied using performance-enhancing drugs and methods, and has blamed the Clenbuterol test on contaminated meat. Unless he can successfully challenge the evidence, he's facing a two-year ban for the Clenbuterol test, and the plasticizer readings could complicate his legal strategy.

The test for plasticizers was developed by a group of anti-doping scientists in Spain, Germany and Australia. The test was publicized at a conference in Tokyo in November of 2009, when a group of scientists representing the World Anti-Doping Agency's accredited laboratories were told that an exciting new test was coming down the scientific pipeline.

When some of the scientists developing the test published a report on their findings in the January 2010 edition of the journal Transfusion, some people in the anti-doping world were upset, thinking the labs would lose the element of surprise. (Intravenous infusions have been banned by WADA only since 2005, so the presence of plasticizers in samples older than that would be legal from an anti-doping perspective.)

"We fully intended to have this test up and running before publicizing it," said the person familiar with Contador's case. "We had feared that once that article was published, athletes would start finding work-arounds."

There is a vast amount of research out in the world about DHEP and other compounds that leach out of plastic containers and into the food and medicine people consume on a daily basis. Much of the research is driven by concerns that the plasticizers might be carcinogenic or cause birth defects.

The federal probe into Armstrong is based in the U.S. District Court in Los Angeles. The agent driving it is BALCO-busting Food and Drug Administration investigator Jeff Novitzky, who has worked closely with anti-doping agencies in the past.

Armstrong and his defenders have pointed to Landis' own admissions that he had no evidence of the cheating he claims to have witnessed and participated in.

But the new plasticizer test might mean that Landis, Armstrong and other cyclists have been building an evidence list all along, one beaker at a time, in refrigerators all around the world.
Posted by Recovox at 7:16 PM