Interbike back flips on Anaheim move 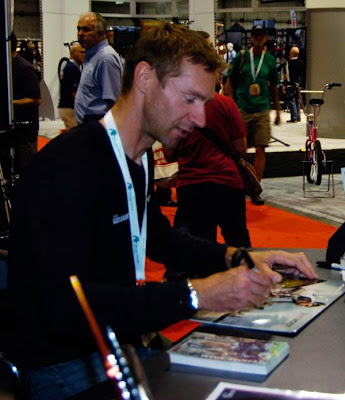 Organisers of cycling’s main North American trade show, Interbike, have announced the show will remain in Las Vegas, USA, for a further two years. The announcement follows an underwhelming response to its August announcement that the show would move forward to August and to Anaheim in California.

In addition to remaining in Nevada the show will also retain its usual position in September, rather than the attempted August date which would have put it before Germany’s Eurobike.

Interbike director Andy Tompkins said the back-flip came after a ‘very real response’ from the industry.

“We are hearing loud and clear that, at this time, the industry prefers September dates and the convenience of Las Vegas," said Tompkins. "The announcement that we were moving the show dates and location elicited a very real response that surveys and discussions alone couldn't accomplish.

"Due to the overwhelmingly positive response to this year's show and the countless conversations we've personally had with exhibitors and retailers regarding the future dates and location of Interbike, we are reversing our earlier decision to move the 2011 show to Anaheim in August,” he added.

"Interbike has always been and will continue to be the industry's show," continued Tompkins. "We have heard the market's passion and commitment to this event and we want you to know that we are listening. We believe the new direction will best serve the current needs of the marketplace."
Posted by Recovox at 6:33 PM