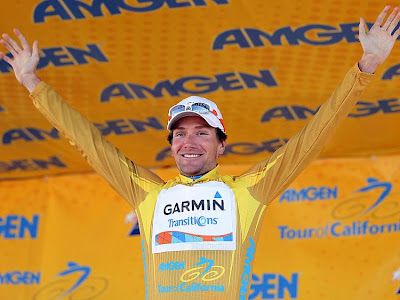 Following weeks of speculation and anticipation, the Host Cities for the record-setting Amgen Tour of California professional cycling road race were announced this morning by race presenter AEG. Consistently considered cycling’s most important and successful road race held in the United States, the sixth annual event will cover more than 800 miles over the epic eight days.

The 2011 Amgen Tour of California will travel to and through 15 Host Cities throughout the state over the course of eight days from May 15-22, 2011. Last year’s date change from February to May allowed the Tour de France-style road race to visit locations that would not have been possible previously, including a visit to Big Bear Lake. Due to the incredible success, the race will remain in May to provide fans with the most action-packed, exciting race possible.

The race will wind through miles of beautiful California terrain, beginning with the first-ever visit to Lake Tahoe, a well known cycling destination and home of “America’s Most Beautiful Bike Ride.” The eight-day race will travel through some of the state’s most scenic landmarks, with the overall finish taking place in title-sponsor Amgen’s hometown community of Thousand Oaks.

“Last year we witnessed the benefits of moving the Amgen Tour of California to May – better weather, a new, challenging route and more intense competition,” said Andrew Messick, president of AEG Sports. “In 2011 we plan to continue to showcase the beautiful features the state of California has to offer, while also continuing to raise the bar for what it means to be the largest, most important cycling race in America.”

Highlights of the 2011 route include the race’s first visit to Lake Tahoe, with the first day of racing featuring a more than a lap and a half around the lake. The riders also will summit famous Donner Pass on the way to Sacramento. On the way to San Jose, America’s largest cycling event will venture into the Diablo Mountains for the first of two challenging mountain stages for the world-class cyclists. The riders will once again take the beautiful Pacific Coast Highway down the coast through Big Sur. Another exciting addition to the 2011 race is the final climb up to the Mt. Baldy ski area, whose steepness and switchbacks are legendary in the Southern California cycling community.

“The 2011 Amgen Tour of California route is going to result in an exciting and compelling race,” said Lance Armstrong of Team Radioshack. “All of us at Team Radioshack are looking forward to it.”

Beginning with the inaugural year in 2006, the Amgen Tour of Californiaquickly became the most successful race in the United States with regards to economic benefits to the state, global recognition and the level of competition. The race also continues to set records in attendance for a single sporting event in the state of California, as well as any cycling event ever held on U.S. soil, with more than 2 million spectators in previous years.

“From the world-class riders and challenging competition, to the tremendous amount of support from the fans and Host Cities, the Amgen Tour of California has grown to become one of the most anticipated events within the international cycling community,” continued Messick. “Making the final selection of Host Cities for the race becomes an increasingly challenging task each year.”

With the 2011 Amgen Tour of California once again taking place in May, the cyclists will have more time to train, and the competition promises to be even tougher. In previous years, the race has drawn some of the world's most renowned and respected riders, such as top Tour de France competitors, World Champions and Olympic medalists that include Lance Armstrong, Tom Boonen, Oscar Freire, Paolo Bettini, Fabian Cancellara, Carlos Sastre, Ivan Basso, George Hincapie, Mark Cavendish and Andy Schleck.

“I was in as good of shape the past three years [when I won the Amgen Tour of California] as I am now,” said Levi Leipheimer, race winner from 2007-2009, after the 2010 race. “The difference this year is that you see a couple of riders on the same level. The competition has definitely risen.”

Returning as the title sponsor for the sixth consecutive year, Amgen will continue to leverage the race to raise awareness and support for people affected by cancer through its Breakaway from Cancer® initiative. A leading global biotechnology company with headquarters in Thousand Oaks, Calif., one of the 2011 race Host Cities, Amgen's invaluable support has helped to ensure the continued success of the race and impact beyond the sporting arena.

“The 2011 Amgen Tour of California route will deliver new challenges for the professional cyclists and also give Amgen an opportunity to introduce our company and our Breakaway from Cancer initiative® to California communities that are getting involved in the race for the first time,” said Stuart Arbuckle, vice president and general manager, Amgen Oncology. “We look forward to collaborating with all of this year’s Host Cities to spread awareness about Amgen, our mission to serve patients through using biotechnology to create medicines for people with grievous illness, and the incredible support services that are available free of charge to people affected by cancer through Amgen’s non-profit Breakaway from Cancer® partner organizations.”

The only American race listed on the international professional cycling calendar with a 2. HC ranking, the Amgen Tour of California has drawn the attention of both cycling enthusiasts and first-time spectators, solidifying its position as one of the most anticipated cycling events of the year.