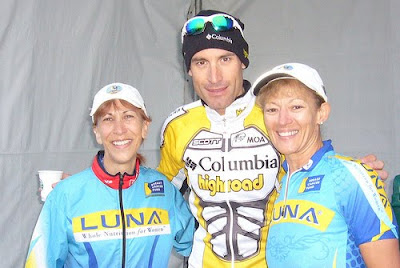 The Amgen Tour of California has announced two cyclo-sportif rides to be held in conjunction with next year's race, in order to raise funds and awareness for Amgen's Breakaway from Cancer initiative.

The two 'Breakaway Rides presented by Specialized', will see up to 7,000 amateur cyclists tackle the second and eighth stages of the 2010 race, a month before the professional peloton. Designed to cater to a range of abilities, participants will be given the opportunity to cover a range of routes that extend up to the full stage distances.

"We are happy to provide amateur cyclists with an opportunity to ride the same route as the pros and to be able to compare their times to the greatest cyclists in the world," said Andrew Messick, president of race organiser AEG Sports. "We are expecting that these rides will expose cyclists to the beauty and challenges that our professional athletes will face."

Each ride will be limited to a maximum of 3,500 participants, with a proportion each rider's entry fee will be donated to the initiative's four charities: Prevent Cancer Foundation, Patient Advocate Foundation, Cancer Support Community and National Coalition for Cancer Survivorship.

"The Breakaway Ride events will give cycling enthusiasts and community members an opportunity to experience the 2010 Amgen Tour route first hand and at the same time support The Breakaway from Cancer initiative, which raises awareness of a range of free services available to people affected by cancer," said Stuart Arbuckle, Vice-President and General Manager at Amgen Oncology. "Amgen and its non-profit Breakaway from Cancer partners applaud AEG and Specialized for their outstanding support of these events."

Participants in the event will be encouraged to raise as much money as possible in the lead up the rides, with event sponsor, Specialized to provide a S-Works Tarmac or Roubaix bike to the top fundraisers at each event. Those donating to the event will also have the opportunity win prizes that include VIP experiences at the Tour of California, May 16-23.

The two Breakaway from Cancer rides will be:

Details of the route for each ride will be announced on February 1, 2010, at the official presentation of the 2010 Amgen Tour of California route.
Posted by Recovox at 8:46 AM