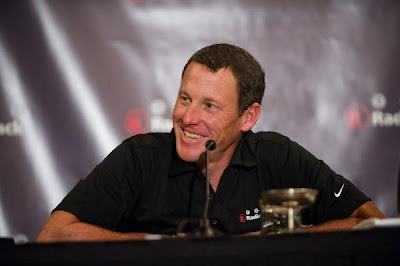 Lance Armstrong at his first official RadioShack press conference in Arizona on Tuesday. He said the team will share leadership in 2010.

Lance Armstrong gave his first official press conference for the new RadioShack squad at the team's training camp in Tucson, Arizona on Tuesday and he had one point to clarify: the team is not built around him.

Armstrong fielded questions about his new team and his comeback year, describing how his "experiment" rekindled his passion for the sport and inspired him not only to continue racing in 2010, but also to put his weight behind the formation of the RadioShack team.

Despite the fact that he is by far and away the best known rider in the sport of cycling and achieved a podium finish after a three year absence from the Tour de France, he insisted that the team, even at the Tour, will not be solely focused on him.

"The days of this team being built around me are done," Armstrong said concisely. "I'm 38 now, I'll be 39 this season - it would be irresponsible to build it around me. Going into the Tour we have to look at Levi [Leipheimer], [Andreas] Klöden, the tactics, the ideas that we use..."

That said, Armstrong feels he will be even stronger in 2010 than this year after having raced a full season. "All the training, the Tour and the Giro [d'Italia], that will benefit me going forward in 2010. This December already feels different than last December."
Posted by Recovox at 9:53 AM