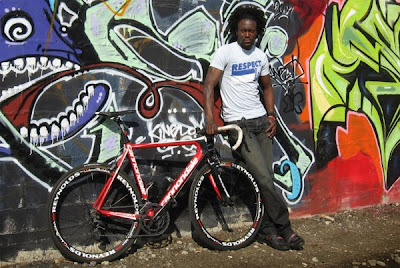 Rahsaan Bahati's newly formed Bahati Foundation pro cycling team is hitting the ground running ahead of the 2010 season, announcing Cannondale as its official bike sponsor, and the creation of a television series with partner Endure Media Group, to air next fall.

The team will kick off the season at the Redlands Classic in California on March 25 after a two-week training camp in Los Angeles.

Bahati created the foundation with the purpose of showing children in underprivileged communities that they can avoid a life of "crime, gangs and drugs", much in the same way Bahati himself did with his cycling career.

The television six-part series,"Bahati: Out of Compton" is part of the team's media blitz, with the first episode planned to highlight Bahati's childhood in Compton, California, one of the toughest areas in Los Angeles. It will then follow his success in the world of professional cycling through to the creation of his pro team and his community activities.

"This project captures the essence of the human condition," said Endure spokesperson Matthew Hall. "[Rahsaan] Bahati's story is one of hope, compassion and excellence. We use cycling as a backdrop to tell [Rahsaan's] story, and weave the excitement of the sport, the passion of the events and celebrity cache for tremendous impact on the community."

"This will catapult the efforts of the Bahati Foundation to positively impact the lives of inner-city and underprivileged youth by bringing our message into the homes of millions of viewers," said Bahati.

The Foundation is currently in negotiations for broadcast of the series, but hopes to see it air mid- to late-summer. "One of our key partners, Cannondale Bicycles, recognized the opportunity early on and is committed to providing significant resources to this project."
Posted by Recovox at 2:18 PM