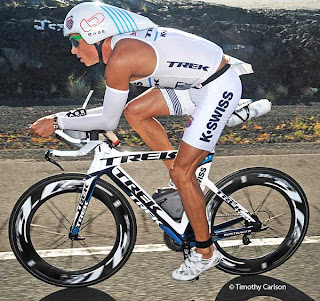 The annual broadcast highlights top professional and age-group athletes from around the world competing in sport’s most grueling endurance event.

For the 19th consecutive year the 2009 Ford Ironman World Championship broadcast will air on NBC, Dec. 19, 2009, from 4:30 – 6 PM ET (check local listings). The telecast will highlight the physical and emotional journey taken by athletes during the renowned 140.6-mile triathlon. Veteran sports commentator and narrator Al Trautwig will provide the voiceover.

In its 31st year, the Ford Ironman World Championship start cannon sounded on Oct. 10, 2009. Nearly 1,700 of the world’s fittest athletes braved the harsh elements of Kailua-Kona, Hawaii, in an attempt to earn the title of “Ironman.” Temperatures on event day reached 90 degrees Fahrenheit and higher at certain times on the bike and run portions. Athletes ranging in age from 20 to 80 years competed in the 2.4-mile Pacific Ocean swim, 112-mile bike ride and 26.2-mile marathon in a classic battle of human motivation versus sweltering heat and mental and physical fatigue.

“Each year we look to inspire our viewers with the raw power and competitive nature of the professional athletes along with the impressive stories of courage and determination demonstrated by all participants,” said Peter Henning, vice president of television production for Ironman. “The course might not change year to year, but the drama continues to intensify.”

The broadcast captures the emotion of the day and features head-to-head competition among the top male and female professionals. The program documents Australia’s Craig Alexander as he adds a second consecutive Ironman World Championship title to his resume and Wellington, who secures her third by breaking the course record of Ironman great, Paula Newby-Fraser of Zimbabwe, with an overall time of 8:54:02. The program also highlights the 17-hour challenges of several unique professional and age group athletes who define the meaning of inspiration and bring to life the “Anything is Possible” mentality.

* Matt Hoover, season two winner of NBC’s “The Biggest Loser,” who gave it his best to be an official Ironman finisher, but crossed the finish line mere minutes after the midnight cut-off time.

* Rudy Garcia-Tolson, a double-amputee with numerous world records, who completed an impressive swim but narrowly missed the cut-off after biking the 112-mile course.

* Four-time Lymphoma survivor and heart transplant recipient Kyle Garlett, who was not able to complete the challenging swim within the allotted time frame.

* Mike Adamle, a former professional football running back and well-known national and Chicago-area sportscaster, who tested his strength and drive for the second time in Kailua-Kona.