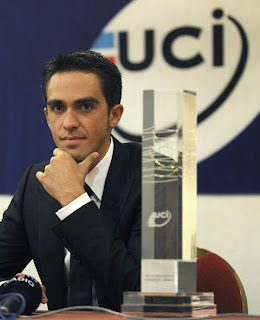 Two-time Tour de France winner Alberto Contador said Monday that 2009 has been his best year ever, as he received the award from the International Cycling Union (UCI) as this season's top rider.

"I think this has been my best year ever, in terms of results rather than other circumstances, given the constant tension and pressure to which I was submitted," said the Spaniard.

He was apparently referring to his tense relationship with his Astana teammate, Lance Armstrong, a seven-time Tour de France winner who came out of retirement to take part in this year's race.

Armstrong left Astana this year for the RadioShack team.

"It has been the most important year of my life on a sporting level," said Contador, after receiving the award from UCI President Pat McQuaid for topping the world rankings this year.

Contador won his second Tour de France crown in July, after first taking the title in 2007.

The 27-year-old, who confirmed recently that he would remain with Astana next season, said he is now "excited and motivated" about next season, when his main goal will be a third Tour de France title.

"The fact that there is no team time-trial should clearly help us," he said. "What concerns me more is the cobbled roads, I hope we can get through that. It will be important to avoid falls that can ruin the race."

The third stage of the Tour, between the Belgian town of Wanze and Arenberg in France on July 6, includes 13 kilometres (eight miles) of cobbled roads.

The rider said he has scheduled "a block of races" earlier in the year, including the Tour of the Algarve, the Paris-Nice, the Tour of Catalonia and the Tour of the Basque Country.
Posted by Recovox at 8:17 PM