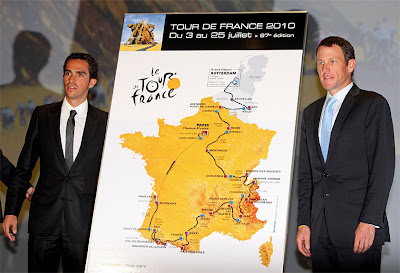 Lance Armstrong continued his campaign of criticism against Albert Contador, saying the two-time Tour de France winner “is surrounded by yes-men” and saying that he acts like “the king of Spain.”

In an interview which appeared in the Dutch newspaper De Telegraaf and the Belgian Nieuwsblad, Armstrong reiterated that Contador's success had gone to his head. “If you have just won the Tour for the second time and you are the king of Spain, it is normal that all stories are all right. His career has barely begun. Let us talk again in about fifteen years.”

The American said he was surprised at reports in the Spanish media about the atmosphere on Team Astana during the Tour, “So many dirty things, unbelievable. Complete bullshit, pieces of slime, fat lies.”

One example was the time trial wheels, with Contador claiming that he was not provided with the proper ones. “First, this is not true. Secondly, it is easy to prove. You only have to grab the phone and call the bicycle manufacturer Trek. I understand that the Spanish media stands up for their hero, but it was so untrue what was printed. Come on, at the end of the day as a journalist, you f**king do proclaim the truth."

Armstrong cited another example, the third stage of the Tour to La Grande-Motte, when a 28-man group, including Armstrong and Astana teammates but excluding Contador, got away with 32 kilometres to go. Armstrong indicated that he was in the break because he was near the front of the peloton, as a top ride should be, and that the Spaniard was not.

"He felt this as an attack on him, and so did the Spanish media. I was in a bike race and had a radio. Every five minutes we all heard Johan Bruyneel call: ‘Stay in the front. Keep front.’ All I did then, was what I was supposed to do. Someone told me that he himself caused the break in the group. "

Especially damaging to Contador, he found, was the fact that "eight of the nine riders who rode the Tour, have gone away. To another team. Even his roommate."

Had this happened to Armstrong, he said, “I would have long since looked in the mirror. I would never let that happen. Never. If I had to change myself to prevent it, then I would do that. If they needed more money, I would do it. I would do anything for them. "

"But Contador is totally different from me. It is very difficult,” the seven-time Tour winner continued. “He knows no better. He is a Spanish guy who is always in the same pueblo (district) resident. He has his friends, family, the street where he grew up, his country, his people. A great athlete like him must employ individuals who support him and have patience with him. But he is surrounded by yes-men.”

Armstrong also admitted that he did not know Contador that well, but said, “I am impressed by the athlete but it stops there for me.”
Posted by Recovox at 4:08 PM