Hincapie Ready For The 2010 Season 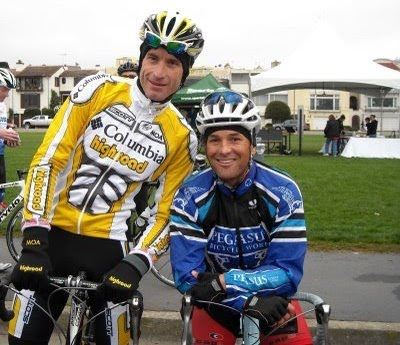 George Hincapie is looking forward to the challenges of a new team and a new season. The American champion will be riding alongside World champion Cadel Evans for BMC Racing Team in 2010.

“Coming to this team, I am very excited by the growth potential it has over the next two or three years,” Hincapie said. “I’m excited to grow with the team, and I am confident that we have the experienced staff to guide the group; we’ll certainly be well taken care of.”

Evans and Hincapie will be opening the year at the Tour Down Under. “I’m happy to be starting off my season at the Tour Down Under since I’ve enjoyed that race in the past and it gives us a good chance to race in some warm weather,” Hincapie said. “Having Cadel on the team roster for that race too, especially since he is the World Road Champion, will make it special.”

The team will have its eye on the overall rankings at the race, but doesn't expect Evans or Hincapie to be in the running. “Evans’ goals are pretty clear later in the season, and the parcours doesn’t really suit him,” Hincapie explained. “My goals come a little later in the spring too, but we’ll certainly have some guys heading there to get results.”

The 2010 roster poses challenges for the team's sporting management. “Though we do have experienced riders like Evans and Hincapie joining, half our riders are under twenty-five,” noted European Operations Manager and Assistant Directeur Sportif Noel Dejonckheere.

The Belgian is also new to the team, having previously worked as long-time Under-23 Development Program Director for USA Cycling. Ironically, one of the first young riders he worked with was Hincapie. “And now here I am back with him again and he is one of the veterans,” Dejonckheere added.

Hincapie has still another motivation for the 2010 season, as BMC will race in clothing produced by his own company, Hincapie Sportswear. The new outfits have met with approval from the other riders.

“We have already had a chance to try out the new Hincapie stuff, and it is pretty neat,” teammate Jeff Louder confirmed. “Since George is behind the brand that means everything has been very well-thought out. It also means that the team will be directly linked to the company and will be more involved.”
Posted by Recovox at 10:29 AM