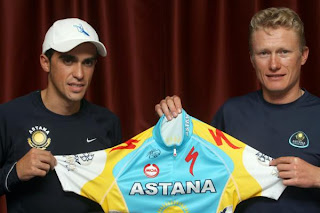 Astana's Alberto Contador and Alexander Vinokourov have presented a united front as they unveiled their team jersey for the 2010 season in Pisa, Italy.

The team's sky blue theme will continue, though it has abandoned the navy blue of this season for more yellow - a design that reflects the Kazakh national colours. The new jersey also incorporates the logos of new sponsors Samruk Kazyna and bicycle supplier Specialized.

Significantly, both Contador and Vinokourov were on hand to display the new uniform. The Kazakh rider this week pledged his support to the Spaniard's attempt to win a third Tour de France, while Contador himself expressed his confidence that he would be ready to defend the second Tour title he claimed in July.

Astana's training camp, conducted last week in Pisa, Italy, has also given the two rider the opportunity to meet and train with a flood of new riders to the team for 2010. Spaniard Oscar Pereiro joined his new teammates after confirming his contract with the team on Wednesday, while former-Lampre riders Paolo Tiralongo and Enrico Gasparotto also took part in the pre-season training.

The week in Pisa will be followed by a second camp in Spain in January. 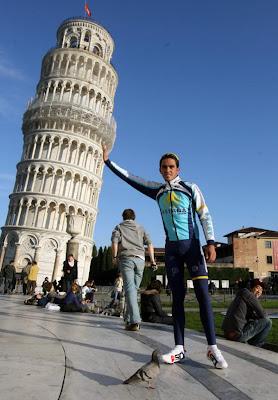