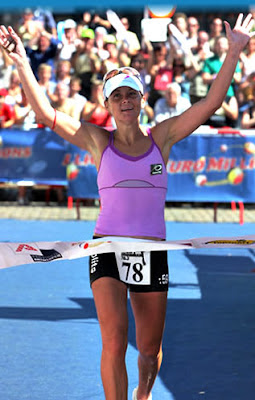 Rebecca is seen as an overnight sensation in Ironman racing.

However, those who know Rebecca can remember her competing in her first world age group championship as a junior. This culminated in her winning her age group in the World Championship in Queenstown, New Zealand. On the day that Emma Snowsill was succesfull in the pros.

Becky then took it upon herself to seek a try out if there was any possibility that one day she could make it as a pro, to at least do one season overseas to fullfill her long time triathlon dream.

As fate would have it, she travelled to Europe and within 3 short months, her coaches believed that Rebecca had been competing in the wrong races. She was entered in a series of half Ironman races in France, and at once the true potential was evident for all.

On the back of 3 sensational wins in half Ironman, it was decided that she should undertake Ironman UK. The outcome was a bigger shock to Rebecca than either her coaches and her training partners, who had seen her ripping up long distance training programs in Switzerland.

Her win in the very first Ironman ushered in a new star. Then Rebecca backed it up with an unbelievable 11th at her first start in Hawaii.

In the next season, Rebecca went on to create a new history, when she won the Swiss Ironman, and then decided to back it up 2 weeks later by competing in Ironman Austria. After fielding many complaints, and many are-you-mad's, she went on to do the impossible - not only completing the Ironman - but beating the two-time World Champion Lori Bowden in what could only be described as a 9 hours drag race between the old champ, and the up-and-coming one.

Then a string of bad luck accidents unrelated to triathlon saw Rebecca exit from the scene, and not surface for 6 months. Then battling her way back into form, she had the unfortunate incident of kicking a boulder, fracturing a metatarsel, sending back her return to racing by another 3 months.

But the return was worth waiting for. She again won the Swiss Ironman, then backed it up by again finishing 3rd in the Austrian Ironman, only to prove she had lost none of her ability, then went to 70.3 Antwerpen, to blitz the field in the shorter race.

Rebecca's training has been going along very well, and we are confident that Rebecca Preston will one day hit the podium at Hawaii. The only question is a matter of when. We wish Rebecca the best of mechanical luck, and a happy memory to be the second of many memories of Hawaii.
Posted by Recovox at 4:39 PM