Chrissie Wellington Surprises Even Herself 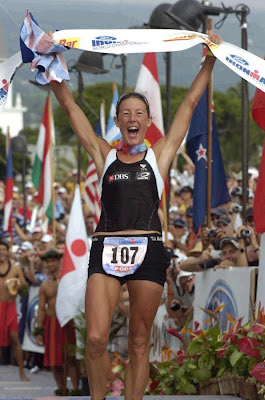 You�d be forgiven if you looked at the results from yesterday�s Ford Ironman World Championship, saw the name of the women�s champion, and asked �Chrissie who?�

Chrissie Wellington is hardly a household name in the world of Ironman racing. Her first year in the sport was last year, when she claimed an ITU World Age Group title. Just seven weeks ago she competed in the Standard Chartered Ironman Korea race, her first Ironman. She easily won that race, finishing an astonishing seventh overall in the brutally tough conditions.

Despite that impressive result, Wellington arrived in Kona as absolutely no one’s race favorite, even her own.

“I was hoping for a top ten,” she understated at yesterday’s press conference.

Wellington’s journey to claiming the Ironman title here in Kona has been anything but normal. While she was an “active child,” growing up and a competitive swimmer as a teenager, she was hardly what she considers a competitive athlete. While she swam while in university, that was more an exercise in drinking, she joked in an interview after yesterday’s press conference.

After she finished university, Wellington spent a couple of years traveling. She returned to school to get her masters, then was off traveling again. She started running in 2002 because she wanted to lose some of the weight she’d gained while on the road. That led to her first marathon, a 3:08 effort at the London Marathon in 2002.

While riding her bike a couple of years later, Wellington was hit by a car. She suddenly found herself unable to run or bike, so to keep active she started swimming. Triathlon seemed like a logical next step.

Sandwiched in between all of that was a work stint in Nepal, where Wellington found herself riding over some pretty major terrain to keep active.

“Nothing seems difficult compared to trying to ride over those mountains,” she joked yesterday.

After claiming the world title last year, Wellington’s coach suggested that she go and meet with Bret Sutton at his base in Switzerland.

Go for it she did. She joined with Sutton’s elite group of athletes which includes the likes of Ironman champions Belinda Granger, Rebecca Preston, Lisbeth Kristensen and Ironman’s picture of consistency, Hillary Biscay.
“I wanted to do Olympic distance, but my swimming isn’t where it needs to be to be competitive,” Wellington says. “Five weeks before Korea he asked me about racing there. I asked him, ‘Am I ready, Boss?’ He said I was, so that’s what we did.

The rest has quickly become history. Wellington dominated in Korea and made her second Ironman even more impressive by beating the best in the world. She was so strong throughout the day that when she rode by the lead group to take the lead Granger said to anyone who would listen “There goes today’s winner.”

Granger was right. Wellington’s 2:59 marathon was the second fastest every run here in Kona – she was never really challenged once she went to the front of the race.

While she arrived in Kona relatively unknown, Wellington will leave the Big Island as one of the biggest names in the sport. That’s after only two Ironman races under her belt … one can only imagine how many more huge wins we’re likely to see.
Posted by Recovox at 9:46 PM