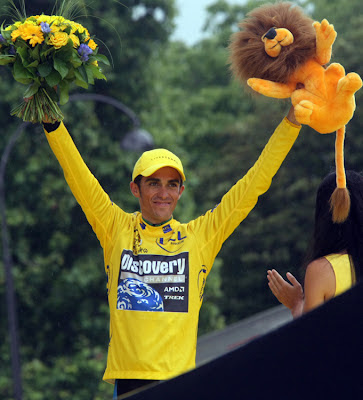 As reported yesterday on VeloNews.com, Tour de France winner Alberto Contador will ride next year with Astana under the leadership of Johan Bruyneel.

The Spanish daily MARCA reported Wednesday that Contador will sign a two-year contract worth 1.5 million euros per season and bring Benjamín Noval and Sergio Paulinho with him. Other riders linked to Bruyneel's move to Astana include Janez Brajkovic, Levi Leipheimer and Tomas Vaitkus.

Leipheimer looks likely to join Bruyneel as the Belgian director is poised to take over the troubled Astana team as general manager as part of a three-year contract.

No official announcements can be made until the Kazakh sponsors reach an accord with current team manager Marc Biver to clear the way for his departure from the team. Biver came under fire following a string of doping scandals on the team, including the blood doping positives of stars Alexandr Vinokourov and Andrey Kashechkin.
Posted by Recovox at 9:38 AM