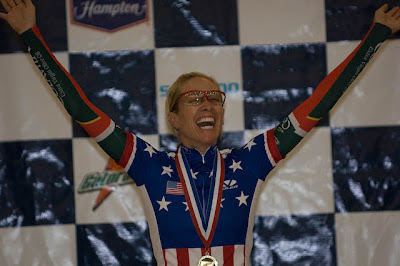 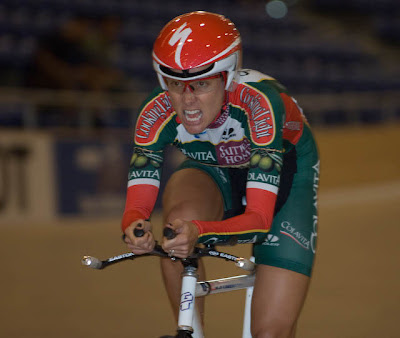 Top-seeded Dotsie Bausch (Colavita-Sutter Home) took home the gold in the women's pursuit, coming from behind to beat Christen King. 2002 pursuit champion Angie Vargas-Coggan was third, taking a close-fought battle against Neva Day. Bausch got off to a rough start in her gold-medal round pursuit race, wiping out in the first 10 meters while attempting to get a powerful start. The officials restarted the race after Bausch, an admittedly novice track racer, collected her thoughts. Her subsequent second start was noticeably more apprehensive, and it showed early on - allowing Christen King to begin with a comfortable lead early, and even maintain an advantage to late in the race. But slow and steady wins the race, and for Bausch, the words rang true as she rode to her first track national championship.

"I was a second or so slower, but it didn't matter," said Bausch. "She was killing me early on and I did get a little freaked out, but then the adrenaline kicked in. I listened to Andy every lap from there."

"I felt good about my chances in the last four laps after watching her qualifying ride, I knew I could be patient."

Bausch is one of many riders here this weekend that are converts from the road side of the sport. And like the others, she is enjoying her exposure to the track. "It's been really fun so far. It's new which is what makes it fun, and I love that there aren't as many variables than in the road. It's been amazing training with Sarah [Hammer] and Andy every week. This track is like 35 minutes from my house! I knew that in the second week that I was sticking with it!"

"I thought that might give me a little advantage," said King about Bausch's mishap. "But it didn't. She rode like an experienced pursuiter, and she's only been doing it this year!"
Posted by Recovox at 9:10 AM