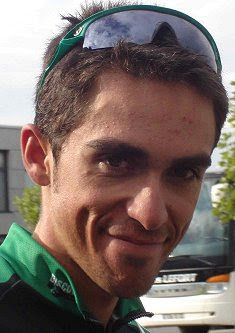 The stage ended today with Contador happy again to have missed out on crashes. “I’ve avoided falling and finished well, like the rest of the team, so we’re satisfied. Besides, Benjamin Noval could start, and was able to cross the finish line. I hope he gets well and can stay in the race.”

The race reaches the mountains tomorrow, where Contador shines. “Tomorrow the race starts in earnest”, said Alberto. “We have to see how the stage looks and how Leipheimer feels, because the team will work for him. We’ll see how the favorites do, because in the mountains, nobody can hide. The truth will out.”

He admitted that while he hadn’t spent much time around Vinokourov or Klöden during the stage, it was obvious they were suffering. “Maybe I’m wrong, but they didn’t look well,” he said, referring to the injuries they sustained yesterday.

About the Alps, Contador said he believes that he has arrived at a good point in his form. “It’s possible to lose a big part of the Tour roster here, especially the ones that aren’t well when they reach this point. I think the Alps will be less decisive than in other years, but maybe now everything has changed because of the crashes that have plagued some riders. To predict how the favorites will do, you can shake a tree and see what falls out.”
Posted by Recovox at 7:17 AM