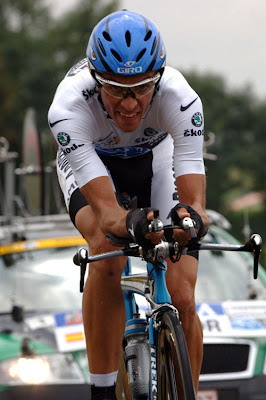 “I don’t expect to lose much time on the top riders in the GC.”

That was Alberto’s wish on the eve of the all-important time trial at Albi. Discovery Channel’s highest-placed rider arrives Saturday in fine fettle, once again staying free of trouble in today’s sprint finish.

“Today got off to a very fast start until the 65-kilometer mark. It was very windy, and it got quite difficult. Then we had a dangerous descent of the Category 2 climb, but it worked out fine, and we got to the sprint without any mishaps.”

Tomorrow Alberto will view the parcours in the morning, “but only to look at it. I don’t think we’ll test any of it on bikes. It’s a bit of a mystery what the outcome will be for me. But in any case, I’d rather the time trial was now than in the first week. I don’t expect to lose much time on the top riders in the GC.”

Alberto takes heart because of his current ranking, and is optimistic. “Before taking the start in London, I didn’t think about this. I was only thinking about doing a good Tour. If someone had said to me it was going to be like this, I’d have voted for it. It’s true that I’ve lost some seconds because of that puncture, but in spite of everything I was not expecting to be so high in the GC.”