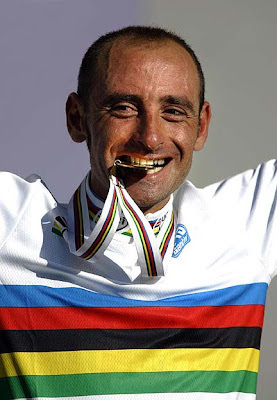 Paolo Bettini isn't riding the Tour de France, but neither is he sitting home idly. This week he checked out the course for the upcoming World Championships in Stuttgart, Germany, and is preparing to return to racing this weekend in the Tour de Wallonie.

The little Italian was in Stuttgart with the Italian national team manager Franco Ballerini and a few others from the national squad. "It is a good route, quick and complicated during the initial phase. The central part seems to be quite easy with some flat sections," he said on the Quick.Step Innergetic website, qsi-cycling.com.

"On the other hand the final is difficult and I'm sure it will be spectacular. The final 3 kilometres are all up-hill. At about 600 metres from the finish line the climb levels out slightly to then continue with a constant three-percent gradient. It will be a stimulating final where we'll need to have our eyes wide open, checking and controlling the race [and] choosing the right moment to make our move. The road surface is good and wide, it will be important to have good team work in order to keep any attacks at bay if a selection hasn't already taken place."

" Overall the race route is worthy of the World Championships," he concluded. "There are a lot of corners but none of them are dangerous and the roads are excellent. This is just the type of route I was expecting".

In the meantime, he will be returning to racing in the Tour de Wallonie this weekend, his first race since the national championships in June. "The Tour de Wallonie is a perfect race for me to return to racing, after a period without competing. It is a very popular race with Belgian fans and I'll be more than happy to take part in the race wearing my World Champion jersey. This will be the second time that I participate in the race. In 2002 I won the general classifications ahead of Popovych. I think a result like that this year will be difficult, though, but I want to use this race to see exactly what condition I'm in ready for the forthcoming events".

His schedule includes the Clasica de San Sebastian, the Deutschland Tour and the Vuelta a España.
Posted by Recovox at 10:24 AM